In a year stocked with many deserving candidates, the 2009 Hockey Hall of Fame class is made up of four undeniable selections: Steve Yzerman, Brett Hull, Brian Leetch, and Luc Robitaille. In the Builder Category, Lou Lamoriello of the New Jersey Devils was also honored. After the jump, more on this latest batch of NHL legends... 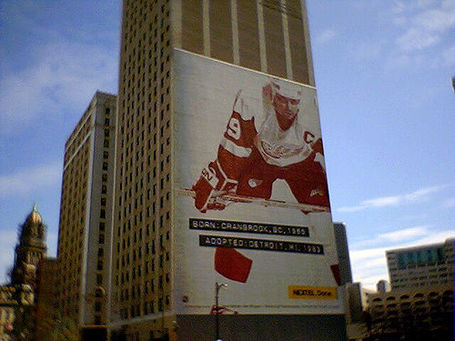 For more than 20 years, Yzerman cast a towering figure over the Detroit Red Wings
Photo courtesy of Flickr user donjoz

"Stevie Wonder" was the most dynamic player in the NHL not named Gretzky or Lemieux in the late 1980's, and led a rebirth of hockey in Detroit that saw the Red Wings make consecutive Campbell Conference finals in 1987 & '88. A Stanley Cup seemed inevitably right around the corner at the time, but it would take almost a decade more of disappointing playoff failures before Yzerman remade himself as an elite two-way player under the direction of Scotty Bowman. The NHL's longest-serving captain ultimately led Detroit to 3 championships, and ranks among the all-time greats in just about every offensive category. The reason so many Red Wings fans seem bitter about Sidney Crosby's success this year is because they see his rise as coming too quickly and easily, compared to the long road that Yzerman had to travel to NHL immortality.

The Calgary Flames traded Hull to St. Louis at the trading deadline during his first full-time NHL season, and at that point the 2nd-generation NHL'er had 26 goals in 52 games. Over the next 11 seasons in St. Louis, however, the "Golden Brett" poured in 527 more goals, establishing himself as one of the premier snipers in hockey history. His 86 goals in 1990-91 stands as the 3rd-highest ever in a single campaign, and his 741 career goals are also #3 on the all-time list behind Wayne Gretzky and Gordie Howe. As a capper, he not only won two Stanley Cups, but with Dallas, scored perhaps the most infamous cup-winning goal in NHL history.

A 5-time 20 goal scorer from the blueline, Leetch was one of the great offensive defensemen of his generation, and is one of the most beloved players in New York Rangers history. As an American, Leetch ranks among the very best blueliners to ever play the game, alongside Phil Housley and Chris Chelios.

The highest-scoring left wing in NHL history, "Lucky Luc" patrolled his side of the ice for 19 seasons, and had his best individual performances in Los Angeles, where he played for the Kings for 14 seasons in three different stints. His 668 goals stand 10th on the all-time list, and he earned a Stanley Cup with Detroit in 2002, playing a supporting role on a team stacked with Hall of Famers. With this induction class, the 2002 Red Wings boast 5 HOF'ers (Yzerman, Hull, Robitaille, Larionov, & coach Bowman) and several more sure-fire locks upon retirement (Shanahan, Fedorov, Lidstrom, Chelios & Hasek).

Besides leading the New Jersey Devils to 3 Stanley Cup championships and proving to be one of the NHL's most consistently competitive general managers, Lamoriello has been a fixture in American collegiate hockey, as coach of Providence College for 15 years, and a founder and later commissioner of the Hockey East Association. He was also the general manager of Team USA during the first World Cup of Hockey in 1996, when the Americans won the tournament.