Can the Nashville Predators ever contend for the Stanley Cup?

Share All sharing options for: Can the Nashville Predators ever contend for the Stanley Cup?

While driving home yesterday afternoon, I listened to 104.5 The Zone while the gang opined about the Nashville Predators and upcoming free agency issues. The concensus opinion was that since David Poile has to operate on a budget, and the Preds rely on revenue sharing, all we can realistically hope for is a team that scratches and claws to barely make the playoffs. There's simply no way they're going to contend with the big boys in Detroit, Chicago, or San Jose.

One of the most important tasks for any NHL general manager or coach is to "manage expectations", and not get the fanbase overly excited about the results their team is supposed to achieve. Over the long term, of course, all teams will have their ups and downs. In Nashville, however, an attitude has sunk in among the traditional media (and, alas, much of the fanbase) that mediocrity is the best the Predators can hope for, spelled out as being a marginal playoff team that hopes, perhaps, to one day win a playoff series.

Maybe this might have been appropriate back during the early days of the franchise, but in the modern NHL, with the salary cap system and revenue sharing, there's really no good reason that the Predators can't contend for the Stanley Cup more often than not, especially if there's any truth to the general opinion that Poile and head coach Barry Trotz are among the best in the league at what they do.

The key to competitive success in the NHL these days is to establish a strong core of proven veterans, and develop young talent around it. Until they hit unrestricted free agency, many star players provide incredible "bang for the buck", and that's an area that the Nashville Predators are particularly well positioned to take advantage of. The main misconception that needs to be cleared up, however, is that there's some yawning financial chasm between the Predators and the top teams in the league.

The Falconer over at Bird Watchers Anonymous (SB Nation's Atlanta Thrashers blog) posted the following graph that demonstrates just how tightly bunched NHL payrolls are these days as compared to the pre-salary cap era: 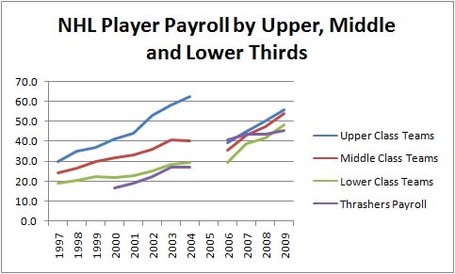 Before the Great Lockout, the bottom third of the league had payrolls less than half that of the big spenders, a gap of over $30 million. These days, that gap has closed to about $10 million. The spread between the "Haves and Have-Nots" is tighter than any time in recent memory, and unless the CBA is radically changed in the next few years, there's no reason for it to widen again.

With only a $16 million range to work with between the salary cap and floor, there's no structural reason that any team in the league can't assemble a competitive roster. The Preds appear to be targeting a payroll that's $3-5 million above the salary floor (last year they were $5 million over), and when you throw in the fact that high-spending teams typically leave $1 million of headroom below the cap so they have roster flexibility to deal with injuries and trades, what you really end up with is a spending gap of $11 million between where the Preds are and the elite of the NHL.

In addition, the leading spenders often engage in high profile free agent bidding, paying top dollar for big-name stars such as Scott Gomez, Chris Drury, Brian Campbell, or Ryan Smyth. By staying away from such bidding wars, the spendthrift teams can close that payroll gap even further.

In the days to come I'll break down the Predators roster by position to see how they currently stack up against the rest of the league, and where the opportunity lies to craft a Stanley Cup contender in the short term. But for now, let's cut it with the "poor Preds" talk, shall we?