In a shock to most Predators fans (and their beat writer), Nashville went with a defenseman in Ryan Ellis with the #11 pick in the 1st Round of tonight's 2009 NHL Entry Draft. While the fans' concensus choice, Jordan Schroeder, was still on the board (and ended up going to Vancouver with the 22nd selection), David Poile and his staff opted instead for the smallish, yet gifted offensive defenseman from the OHL's Windsor Spitfires.

Here's what David Poile had to say about his new prize:

In terms of hockey stat geek credibility, Ellis' offensive prowess certainly would seem to translate well to the NHL level. This comes from Lowetide:

Ryan Ellis is off the charts in terms of boxcars and his NHLE is the third best number overall.

In plain English, that means that if you take the offensive totals noted below from the OHL, and project that in to what he might accomplish in a first year in the NHL, his forecast stands 3rd-best among all players in the draft, including forwards and defensemen (9 goals, 29 assists for 38 points).

From his profile at NHL.com, we have certainly have some flattering highlights:

• In just his second season with Windsor, Ellis led all defensemen in scoring and finished seventh overall in the Ontario Hockey League with 89 points (22-67-89) in 57 games.

• A gold medalist with Team Canada at the 2009 World Junior Championships, Ellis was the youngest defenseman to play for Canada since Jay Bouwmeester in 2001, debuting at 17 years of age. He was a plus-six in the tournament, totaling seven points (1-6-7) in six games.

• His 2008-09 season has kept him extremely busy on the ice. He represented the OHL in the 2008 Canada/Russia Challenge, was named to the 2009 Western Conference OHL All-Star Classic and selected to participate in the 2009 CHL Top Prospects Game.

After the jump, some opinion and analysis on the latest addition to the Predators blueline prospects...

His OHL coach (and former Predator) Bob Boughner has this to say:

"I've only been in the (OHL) three years and other coaches I talk to, they've never seen a defenseman have an impact in a junior game like Ryan Ellis. He seems to be in on every play defensively and offensively. If you come away from the game and you look at who was your favorite player, who played the best, his name always seems to come to mind. There are plays where he's making something out of nothing. And his biggest asset is his shot. He's got an NHL one-timer, he's got an NHL slap shot, and that's a dangerous weapon."

Coming Down the Pipe has a more ambivalent view of Ellis as a potential NHL'er, comparing him to Columbus Blue Jackets defenseman Kris Russell:

It leaves me on the fence.

The fan reaction, at least online, has been less than enthusiastic - as talented as Ellis might be, local fans really were pushing for a goal-scoring forward. Here are a few samples of what came through on Twitter: 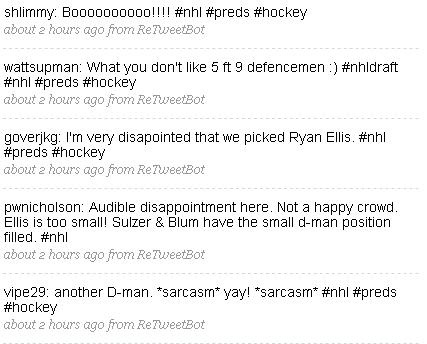 Ellis does sound excited to join the Predators, however - this transcript comes from his post-selection interview:

Q. Looking forward to playing with Shea Weber?
RYAN ELLIS: Yeah, that's the first thought that came to my mind, he had an unbelievable year last year scoring at will, and it's going to be exciting to meet him and if we do happen to run the power play together one day that would be very exciting. He's a great player and they have a lot of great D. Making that D core would be just an accomplishment in itself.

Q. Could you talk about your style of game and if there's a sort of NHL role model you aspire to reflect?
RYAN ELLIS: I'm an offensive defenseman. I think I do a lot of power play stuff, so I think playing with Shea Weber would be great for me. But I think someone who I compare myself to is Brian Rafalski, or Brian Campbell, one of the two. They are smaller guys, but they compete physically and they are offensive and very responsible on their own end, as well. I think that's who I would like to be compared to anyway.

Q. Is there a signature or trademark Ryan Ellis goal or move?
RYAN ELLIS: I think it's just slop shot, top of the corner. On the power play either a one-timer or something like that, that's always how I've scored goals. I'll get the odd one in close but it's mostly from the back end.