A fascinating sequence took place just a few minutes ago as Nashville Predators general manager David Poile did a radio interview on the Thom Abraham Show (@ThomAbrahamShow on Twitter) on WNSR 560-AM here in Nashville. As fans discussed the conversation on Twitter, it appears that Steve Sullivan was also listening in, and was surprised by some of what he heard.

It all started when Abraham asked Poile about the Steve Sullivan negotiations - the general presumption has been that Sully is seeking a multi-year contract, and that the Predators are reluctant to go beyond one year. But Poile stated, when asked directly, that Sully is seeking more than 2 years. Shortly after those words were spoken, we saw the following from @Sully26, which has been verified by the Predators as Steve Sullivan's Twitter account. Keep in mind the newest message is at the top, the original at the bottom: 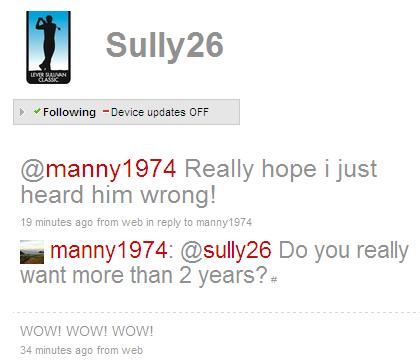 The messages begin with "WOW! WOW! WOW!", followed by @Manny1974 (who appears to be a friend) asking whether Sully is really asking for more than 2 years, and his reply is that he's just hoping he heard Poile wrong.

Obviously Sullivan was listening to the interview, and was surprised by what he heard. Did a bomb just get dropped that pretty much wraps up Sully's days in Nashville? Let's hope not, but between this and some other tweets (found via @CodeyH of Section303.com) that I've seen out there ("Looks like @sully26 will finish where it all started"), it doesn't look like Steve Sullivan will be a Nashville Predator this fall - he started his NHL career as a New Jersey Devil.

Granted, those are unverified, unofficial statements, but it looks like the people around Sully are preparing to help him move, and hope that it's closer to his hometown of Timmins, Ontario.

Either way, it was interesting to see an athlete respond to an interview like this in real-time, as fans were listening and discussing. It just goes to show how Twitter is rewriting the rules these days.

UPDATE: @Sull14, the Twitter account belonging to Sully's brother Gary, has had all the tweets deleted this afternoon, including the one quoted above ("...will finish where it all started..."). That certainly lends itself to the "genuine and unintentionally public" angle. Thanks again to @CodeyH for the tip.

UPDATE 2: Thom Abraham came back to the topic later in his show and played an excerpt from an interview last week with Steve Sullivan, in which Sully specifically says that was asking for a 2-year contract, and that's where negotiations stopped. We appear to have a mismatch between Sully's statement last week, and Poile's comment today. Has the situation changed in the last few days? Who knows, but this situation has taken center stage among Nashville's hockey fans this week.

UPDATE 3: John Glennon at the Tennessean touches base with Poile, who confirms that yes, Sully would accept a 2-year contract (assuming the money is right, of course). What this sounds like is either a miscommunication or misunderstanding by Poile during the radio interview, which triggered Sullivan's reaction.