Sunday's feast: Looking at a rumored 3rd jersey for the Nashville Predators

Share All sharing options for: Sunday's feast: Looking at a rumored 3rd jersey for the Nashville Predators

This morning we're a bit light on the news, so it's a good time to consider an important matter for the upcoming Nashville Predators season; the new 3rd jerseys. Take a look below, vote in the poll, and sound off in the comments!

Before that, however, I do have a couple of items for you.

Steve Sullivan provided another update from the road, where he attended former teammate Jed Ortmeyer's wedding, along with at least two other Preds.

Making the case: Alex Tanguay | Section 303
Instead of worrying about whether the Preds can afford free agent Alex Tanguay (they can't), Jeremy looks at the question of whether they should bid on the sniper's services.

Claims of a Predators Preview - icethetics | the aesthetics of hockey
This was actually posted a few weeks ago, but Puck Daddy brought it up yesterday so it's worth revisiting. The following mock-up was made after a message board poster claimed to have gotten a sneak peek at the new design: 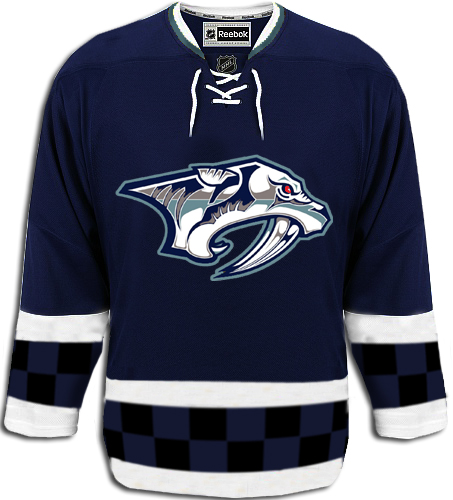 Now, as we heard from David Freeman at the Skate of the Union event, the new 3rd's will have an Original Six feel to them, so the simplicity here certainly goes along with that.

As for my opinion? I'm not crazy about how the white stripes are done, and have a strong objection to the checkerboard pattern at the bottom. I'm OK with having the pattern, but if they really used these colors (deep navy blue and black) you can't really see it! There's just too little contrast there.

But what do you think?