Monday notes: Nashville's goalie pipeline, and a rather unique wedding

Share All sharing options for: Monday notes: Nashville's goalie pipeline, and a rather unique wedding

As Monday morning dawns, yes, we do actually have NHL news above and beyond Patrick Kane's arrest over the weekend (check out the police report if you like). I really hope the Nashville Predators pick up on this and have discounted $1 ticket for licensed cab drivers when Chicago comes to town this season!

Anyways, today we have a look at goaltenders taking the long road to Nashville, more musings about possible free agent acquisitions, and one of the more bizarre wedding photos you'll ever see. All this and more, after the jump...

Predators goaltending pipeline - Hockey's FuturePekka Rinne and Dan Ellis will both be free agents next summer - so what's coming through the development pipeline for the Predators? Holly Gunning breaks it all down.

The View from 111: A Legal High Wire ActCruise down about two-thirds of the way through this piece for a wonderful observation on Jim Balsillie. While he argues in Phoenix that the Coyotes should be awarded to the highest bidder regardless of other considerations, his company is making the opposite argument in a telecommunications bankruptcy in Canada.

Making the case: Todd Bertuzzi - Section 303Jeremy scrapes the bottom of the barrel in a search for scoring help in Nashville. I'd have to think that there are cheaper options, with more upside, then an injury-prone, lumbering brute who's best days were well before the Great Lockout.

Objective NHL: Corsi corrected for Starting Shift LocationAn insightful analysis takes Corsi numbers (Total Shots for and against while a given player is on the ice at even strength) and adjusts them based on where each player starts their shifts; for instance, a player who starts more shifts in the defensive zone gets some relief for that burden. Take a look and see why I think it would have been intriguing to see Antti Pihlstrom get one more run with Nashville, but obviously that ain't happenin'.

Defensive Zone Faceoffs: How Much Do They Matter? - The Copper & BlueFollowing up on two other posts in the Oilogosphere last week, Jonathan Willis examines the importance of defensive zone faceoffs, and whether it's worth acquiring a player specifically to cover that responsibility.

Sabres Stats: Even Strength Shooting - Die By The BladeD.O. runs through the Even Strength scoring tendencies on the Buffalo Sabres, and throws in a comparison to the NHL's best at the end. Was a Nashville Predator among the league leaders in Even Strength goals scored?

30 in 30: Jackets' goal is to take the next step - NHL.com
The NHL's feature on the Columbus Blue Jackets focuses on how they'll continue the progress that saw them make their first playoff appearance last spring. For all the bluster, however, they haven't fixed what I see as a fundamental flaw; the worst defense corps in the Central Division.

NHL sets buyout plan for feuding co-owners of Tampa Bay Lightning - St. Petersburg Times
Oren Koules and Len Barrie, the quarreling owners of the Tampa Bay Lightning, might finally be on a path that will leave the team in one of their hands. Interestingly, a big obstacle is how the survivor will service $100 million owed to the former owners of the team (a similar loan to the $10 million that Craig Leipold loaned "Boots" Del Biaggio during the Predators sale).

The unfortunate truth behind Fleury's comeback - From The Rink
Dr. Mirtle does the homework to see just why Theo Fleury might attempt a comeback at the age of 41, and it turns that he just might be broke (even after earning more than $40 million during his 15-year NHL run). In these economic times, might that angle gain him even more sympathy from hockey fans?

Brodeur is a Fraud: Making "Key Saves" 72% of the Time - Brodeur is a Fraud
The Contrarian Goaltender takes a swipe at the nonsensical notion that some goalies make "key saves". Considering how few goals are scored in a typical NHL game, it's pretty much never a good time to let one in.

2 diehard sports fans married on hockey rink beside homemade Green Monster wall - Sun Journal
Lastly, we've got a couple getting married in Maine in a sports-themed wedding. Included in the vows?"I promise to love you as much as the Nashville Predators and not hold your San Jose Sharks against you," Glenn Porter said of their two favorite hockey teams. "From this day forward, I will listen to all of your complaints about fantasy hockey, if you say them during the off-season." Maybe there's hope for us all...

Actually, it's a good thing they got married on a fake rink, otherwise the groom might have gotten cold feet! Zing! 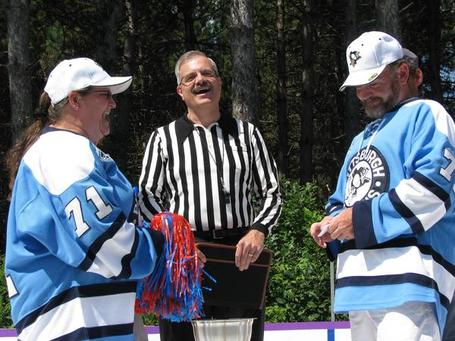