Share All sharing options for: For Nashville's TV stations, Predators news is the same old story

Nashville Predators fans often criticize the local traditional media outlets for the disappointing level of coverage given the team and the NHL in general. Outside of John Glennon at The Tennessean and a few (very few) voices on the radio, it's hard to find any news or insight deeper than re-hashed press releases.

This lack of attention came to light over the weekend as I decided to check out the websites of the various TV stations here in Nashville, to see how well they've kept up to date on our Preds this summer...

First, let's check in with NewsChannel 5 (all screen shots taken over the weekend): 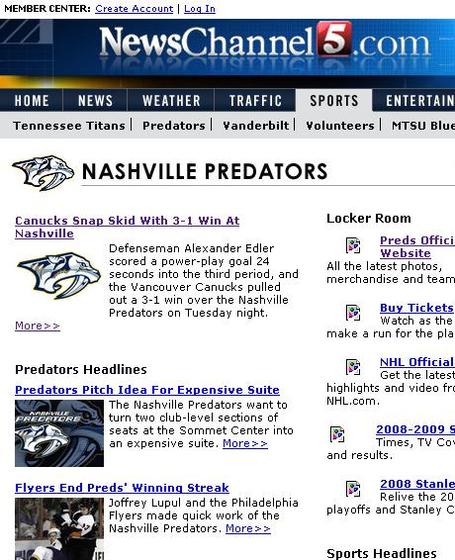 Yikes, a game summary from last December 9 is their lead story, inexplicably followed be a weeks-old item about the proposal for the Reserve at the Sommet Center, then another months-old game recap.

OK, let's move over to WKRN: 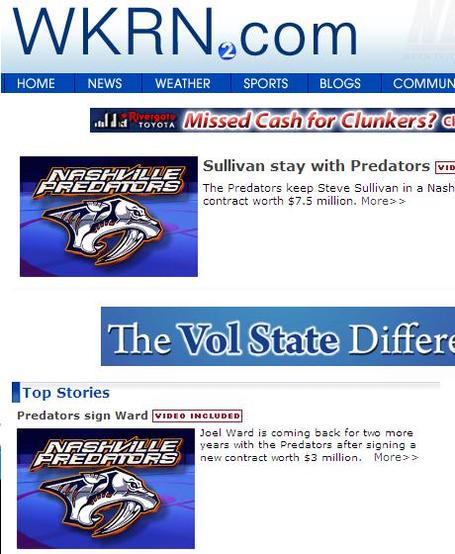 Well, at least this is a little more current, but six weeks old is awfully stale! No word on the players who have been signed over the summer. 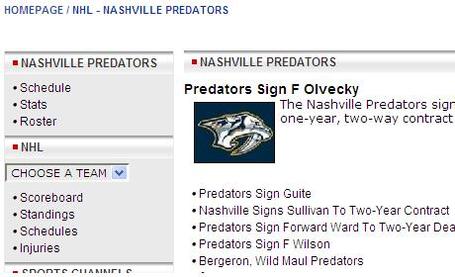 The "winner" of this bunch has a latest update as of July 16, when Peter Olvecky signed with the team.

Now, lest you ask "well, it's not like anything has happened since then..." we did have the Predators Development Camp, which featured all the 2009 draft picks making their first appearance in town, and a concluding practice that was attended by hundreds of fans. There have also been a number of minor free agents either leaving or joining the organization, a public town-hall meeting by the team to discuss the direction of the team, and there are plenty of storylines to speculate about regarding the makeup of the team this fall.

In other words, there's no shortage of material for these guys to dig into, they just choose to let it sit.

My question, however, is that as news organizations, wouldn't they at least want to present fresh information? It might look better just to have RSS feeds from the Preds' official site rather than showing weeks- and months-old stories to visitors.

The sports divisions at Nashville's TV stations can do so much better on their Preds & NHL coverage, and it wouldn't even take that much effort. But a little elbow grease wouldn't hurt, either.