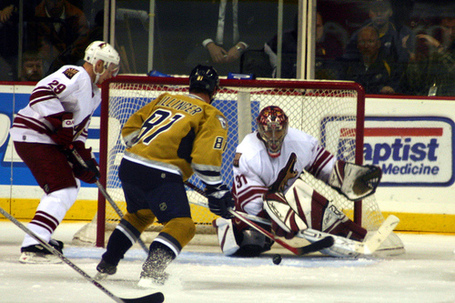 In 31 regular season games with Nashville in 2006, Mike Sillinger scored 10 goals and added 12 assists. Photo courtesy of belly_wright on Flickr

He played for an NHL-record 12 teams over the course of 17 seasons, but now it's time for Mike Sillinger, hockey's consummate journeyman, to hang up the skates at age 38, according to a report at Newsday. Injuries had limited him to just 59 games over the last two seasons with the New York Islanders, but Predators fans fondly recall his run with the Preds. It began with his arrival from St. Louis, in a trade on January 30, 2006, for Timofei Shishkanov, a young forward who went on to play just 22 more NHL games.

Sillinger, meanwhile, was in the middle of his best offensive season, which ended with 32 goals and 63 points, both career highs. He was also a dominating faceoff man at the time, and topped the 200-shot mark for the only time in career.

Just last December, when the Islanders came to town, Sillinger was out of action, wearing a suit and watching from the visiting team's suite up high in the Sommet Center. As I watched him make the short walk from the media room, a number of fans recognized him, stopped to shake hands, and wished him a speedy recovery and return to the ice. That's not just a measure of the Southern Hospitality of Nashville fans, but also a telling sign of the respect and admiration that Sillinger commanded from teammates, opponents, and fans alike.