Talk about good fortune! Just as I was preparing for a guest segment on the Thom Abraham Show on WNSR 560-AM in Nashville to talk about the potential of Chris Chelios joining the Predators, a fresh bit of news came across my Twitter feed. For the latest update, and a chance to listen to the segment, just follow the jump...

First, your chance to hear how it went. You can listen while you read the rest here - (Dirk Hoag on Thom Abraham Show 2009-09-01). Thom does a great job talking about the NHL on his show, and enjoys it, so I highly recommend you call in and prompt further discussion. I, like many of you, am often disappointed with the lack of mainstream media coverage of the Preds and the NHL at large, but Thom's show can be a great option on that front.

Anyways, while getting ready for the segment, I came across this update on Twitter (remember to follow me, @Forechecker): 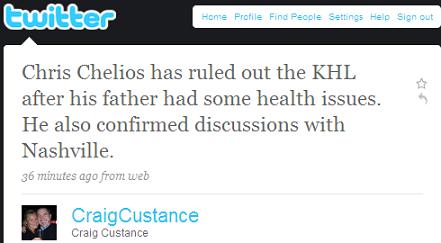 Craig Custance is a hockey writer for the Sporting News, and this latest tidibit eliminates the KHL as an option for Chelios (he had previously talked about heading over to Russia if an NHL job was unavailable).

Just how might Chelios fit in Nashville, compared to two other options noted in John Glennon's article from last week, Greg de Vries and Ken Klee?

Between Chelios, de Vries, and Klee, I would probably go along with the notion that Chelios has the least to offer, but the margin might not be very great. None of these guys are likely to play more than 15 minutes a game going forward, and will play a 3rd-pair & PK role.

This, to me, is where Chelios begins to stand out. While age and experience are nice, what Chelios brings to the table is the resume of a 3-time Norris Trophy winner and Stanley Cup Champion. He's been a leader on some great teams, and can teach guys like Shea Weber and Ryan Suter about what it's like to play 25+ minutes a game against elite opposition night after night during the regular season, and deep into the playoffs.

His work ethic is also legendary. He doesn't just ride the exercise bike for 45 minutes, he does it in the sauna. That kind of example can help shape a young players like Kevin Klein, who has drawn criticism in the past for not pushing himself hard enough.

So what do you think, Preds fans? Should the front office wait things out and see how training camp goes, or bring Chelios on board now? When football fans talk about whether the Titans might be interested in Marvin Harrison, one reason for saying "No" is that if they were looking to bring in the sure-fire Hall of Fame receiver, they would have done so before training camp so he could work with the rest of the team. Does that logic apply here in Chelios' case?