While you await the Predators preview which should post here shortly, we've got your morning news and notes. It looks like the Preds top prospects remaining in camp will start the season down in the AHL, and we hear news that GM David Poile is still working the phones in an attempt to bolster the forward ranks...

GDB minus-2: It’s crunch time - OilersNation.com
Jason Gregor hints at trade talks between the Oilers and Predators, possibly for Robert Nilsson, Fernando Pisani, or Marc-Antoine Pouliot (hat tip to Hockey Do or Die!).

Ben Guite plans for life after Predators - The Tennessean
During his time with the Colorado Avalanche, Ben Guite earned his MBA - surely there's not more than a handful of active NHL players with any form of graduate degree.

Preds’ youngsters are confident but not cocky - Nashville City Paper
With more roster cuts coming, it looks more and more like Jonathan Blum and Colin Wilson will start the season in Milwaukee.

Ryan Ellis reassigned to Windsor Spitfires; contributes two assists in win - Nashville Predators Examiner
Jim Diamond reports that the Preds prospect flew back to Windsor, punched his timeclock in the Spitfires dressing room, and got right back to work dominating his junior hockey opponents.

What The Puck: Team Building Exercise '09
Rachel caught the picture of the Preds on their way to Ft. Campbell for the annual team-building exercise on Twitter. It looks like Ryan Jones needs a Heimlich or something!

Best. Protest. Ever. - Jerseys and Hockey Love
Amidst the cavalcade of protesters at the G20 meetings in Pittsburgh this week, a beaming bit of sanity shines through...

Central Division - The Globe and Mail
Eric Duhatschek provides quick-hit assessments of each team in the division.

Red Wings' Nicklas Lidstrom, Mike Babcock, Ken Holland honored by Sporting News - MLive.com
The Sporting News selects a number of "X of the Decade" designations. It's hard to believe the 2000's are almost over!

Forget the numbers, Gretzky was a good coach - CBC.ca
Scott Morrison finds any reason he can to trumpet Gretzky's coaching record in Phoenix. Look, Wayne's a great guy who has done more for the game of hockey than perhaps any individual I can think of. But even that doesn't mean we should ignore the facts and call him a good coach.

Hejduk signs on for one more year : All Things Avs Colorado
Interesting news out of Denver, where Milan Hejduk is often talked about as a potentially trade candidate given the rebuilding effort going on there. The veteran sniper signs a one-year contract extension which presumably means he's staying in Colorado.

Irreverent Oiler Fans: Positional Shot Quality
An interesting article I overlooked recently examines the split between shots taken by forwards vs. defensemen for each NHL team, to determine whether it explains variance in team shooting percentage.

Phil Kessel: 2006 Interview With Doug MacLean (Book Excerpt) - Hockey Or Die!
A fascinating book excerpt from Phil Kessel's pre-draft interview with the Columbus front office. While it doesn't leave the greatest impression of the guy, it also shows the pressure that young guys get put under with multi-million dollar contracts at stake.

Wheeler: #26 is now ^26 - Bruins.NHL.com
Blake Wheeler of the Boston Bruins joins Twitter, but in what I think is a really poor way. His tweets will be found under the @NHLBruins account, tagged at the end with "^26". Wheeler's tweets (if indeed they are even written by hiim) will be mixed in with the stream of official team communications. Boo Bruins on this one!

Lastly, check out this pic of Jordin Tootoo rocking it out at Tootsie's earlier this week, courtesy of Chris Ennis on Twitter: 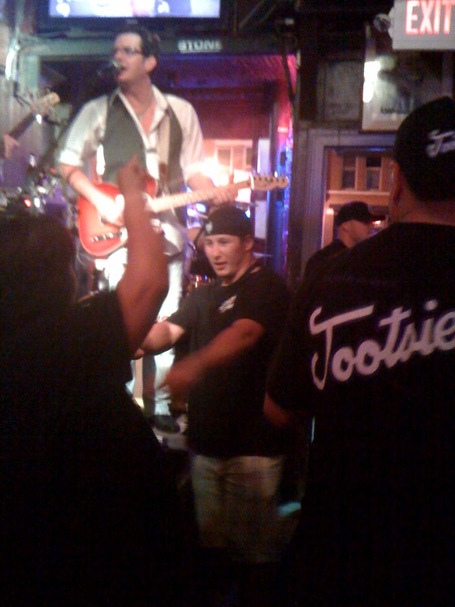