As part of the ongoing Phoenix Coyotes courtroom battle, a deposition from Jim Balsillie was recently filed which outlines his involvement in the failed purchases of both the Pittsburgh Penguins and Nashville Predators. James walks through the Pittsburgh stuff over at From the Rink, but I wanted to highlight some of the Nashville bits here. It makes a fitting followup to the statements by former Preds owner Craig Leipold prior the Board of Governors' rejection of Balsillie's ownership application earlier this summer.

What you'll find after the jump is that, to no one's surprise, relocating the Predators to Hamilton was front & center in Balsillie's mind during the purchase process, and that (fueled in part by Craig Leipold's characterizations) he saw the team as a ready-to-move franchise which he could bring to Copps Coliseum.

Along the way, there's some awfully self-serving opinion about that "Hamilton Predators" ticket drive to boot...

We start with this answer, to a question about whether Craig Leipold was selling the Predators to Balsillie "where-is, as-is", and that he would have to deal with relocation after the purchase had closed: 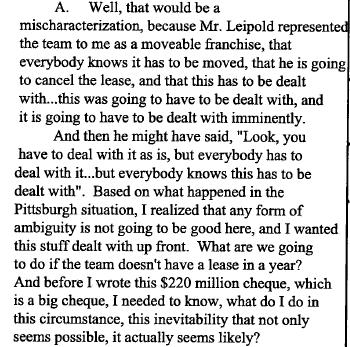 By "he is going to cancel the lease," Balsillie presumably means that Leipold would invoke the "cure clause" that was then in the Sommet Center agreement, which included the milestones related to paid attendance targets that have been so often talked about. If those targets weren't achieved, there was an option to get out of the lease by paying a fee to the City of Nashville, basically. That process was more involved than simply "canceling the lease."

The fortunate thing for Preds fans is that if Balsillie had completed this deal, he almost certainly would have sandbagged the efforts locally in order to ensure that those attendance targets were missed, facilitating the relocation to Hamilton, a la the movie Major League.

Now there is this, later on, but observe Balsillie's use of language when answering the question: 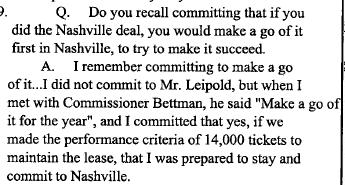 Note that the ordering of the events - if the team achieved 14,000 average paid attendance, he was "prepared to stay and commit to Nashville." It beggars belief to think that he would have actually lifted a finger to try and make that 14,000 come true. With the talk in court yesterday that perhaps he'd entertain keeping the Coyotes in Phoenix one more season, I can't imagine too many folks think that is a good idea.

Later, we have a question about whether concerns had been voiced over Balsillie's relocation efforts potentially hurting Nashville's chances of achieving the 14,000 target in his one year of "making a go of it:"

And by "very discretely", I'm assuming Balsillie means taking season ticket deposits in Hamilton for an NHL team he doesn't even own yet, using their trademark logo in the process.  In his mind, once Leipold invoked the cure clause, all bets were off and he could pursue efforts in Hamilton without negatively impacting the prospects in Nashville.

Interestingly, he does characterize Craig Leipold as "unambiguously pessimistic of the team and its future economic prospects," and claims that the Predators were offered up to him "as a moveable team." From the perspective of a guy trying to sell a hockey team, I wouldn't be too surprised by those statements. It appears that a major bone of contention throughout the whole process was that Balsillie wanted some assurance that he could move the Predators to Hamilton once the Sommet Center lease was out of the way, which the league didn't want to commit to up front. Leipold (understandably) wanted nothing to do with the question, and expected Balsillie to assume all of the responsibility for relocation efforts if they became necessary. He just wanted to cash out.

Feel free to dig through the document at your leisure - there are many missing pages, but it's juicy reading, to say the least.