Tonight the Nashville Predators open a 4-game home stand by hosting the Anaheim Ducks, one of the disappointments in the Western Conference with a 16-17-7 record that leaves them in 13th place. The Preds, meanwhile, at 24-14-3, are in the thick of playoff contention, and are battling to keep within striking distance of division-leading Chicago.

Anaheim Calling joined SB Nation to cover the Ducks a few months ago, and they've had to watch a team that just can't seem to generate any momentum. Despite having elite talent up front in Ryan Getzlaf, Corey Perry and Bobby Ryan, and a Hall of Famer leading from the blueline in Scott Niedermayer, Anaheim hasn't been able to string more than 3 victories in a row so far, and the one time they did that, they went out and lost five straight afterward.

That said, the Ducks are a dangerous squad, having beaten Nashville in their only previous meeting this season, 4-0 at Anaheim. Three of their last four victories have come against Phoenix, Colorado and Vancouver, all Top 8 teams in the West. 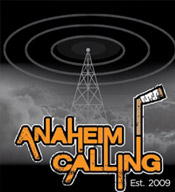 After a long stretch of high-scoring games that had many Preds fans scratching their heads in disbelief, Nashville has seemingly gotten back to their typical style of play. Tuesday night's gritty 2-1 overtime victory in Columbus boasted tight checking, solid goaltending, and persistent forechecking which created turnovers leading to easy goals.

While Martin Erat will miss another few games with a knee strain, Kevin Klein might be back in action tonight. Assuming that he does dress, we're looking at the following likely lines:

The Ducks give up the 6th-most shots in the NHL in 5-on-5 play, and that's something the Preds can capitalize on. The way Nashville has been driving the net lately, there should be opportunities to fire away and go after rebounds & tips.

With the big names cited above (along with the likes of Teemu Selanne and Saku Koivu), it's no surprise to see the Ducks ranked 3rd with a 21.7% power play. That will truly test the penalty killing of Nashville, which, at 75.9% (28th), has been unusually weak so far. Typically the Predators have been much better shorthanded in recent years.

By going just 1-for-8 against Columbus, the Preds have sunk to 29th (15.1%) with the man advantage, so even a middling Ducks penalty kill (78.6%, 23rd) will be a challenge to crack. Like I've said before, at this point it's probably best to look at power play goals as a nice bonus than as something to rely upon. The area for hope here is that the Ducks have had to kill off the 3rd-most penalties in the NHL, so if the Preds can tip the special teams balance in their favor, that can override the effectiveness of either unit.

The rise of Jonas Hiller has made J.S. Giguere somewhat expendable for Anaheim, and he's been the subject of many trade rumors for months now. His hefty contract, however, with a $6 million cap hit through next season, is a showstopper.

Finally, Dan Ellis halted a long stretch in which Nashville gave up at least 3 goals every night (10 games). I wouldn't be surprised to see Pekka return to the net tonight, however. Stay tuned for an update once a starter is announced. UPDATE: Pekka gets the call!

With a return match between these two teams set for next Saturday, the Preds will want to send a message with a disciplined, tight-checking game tonight. Can the "scoring by committee" keep on rolling in front of what is expected to be a packed house tonight at the Sommet Center?

For discounted tickets for Saturday against the Anaheim Ducks, or any Nashville Predators home game, you can follow this link and use the special offer code "PREDS".