Taylor Beck was selected by the Nashville Predators in the 3rd round of the 2009 NHL Entry Draft (70th overall), and since then has been lighting it up for the Guelph Storm of the Ontario Hockey League. With 25 goals and 40 assists through 41 games, he recently had two big honors come his way, which you'll read about below.

To put Beck's production into perspective, Scott Reynolds over at Copper & Blue put together the data on all the forwards taken in the 2009 draft, using the concept of NHL Equivalency (PDF) to translate numbers from various leagues (Canadian junior, NCAA, KHL, Swedish Elite League, etc.) into what would be an estimate of NHL-level production. Despite being the 42nd forward selected in that draft, Beck is the 7th-ranked forward this season, with output that would translate to roughly Joel Ward's level this year if he played at the NHL level (pretty impressive for a teenager).

Recently I spoke with Taylor about his success this season, and what the road ahead looks like for the 6'1" winger.  Follow after the jump for the interview...

Q: You were just named the OHL's Player of the Week for the Guelph Storm, due in part to a 2-goal, 3-assist game against Sudbury on Sunday. Tell me about that game, it sounds like just about everything went right for you.

Beck: Our team heading in was struggling a little bit of late, we'd been playing a solid 40 minutes, but not the best 60-minute game, but we really came together that night. I played with some great linemates, who finished off a couple passes that I gave them, and it seemed like everything was clicking, so it was really nice for us.

Q: Did I read right that that 5-point game came on national TV? I'll bet that was a thrill.

Beck: It's always fun when it's a SportsNet game all across Canada. For me, I like watching other teams play, it gives me a chance to see what I'm going to compete against at the next level.

Q: Besides Player of the Week, you were also recently selected for the OHL All-Star Game.

Beck: Yeah, it's been a good week. I just found out 3 days ago about the All-Star Game, then yesterday I heard about the Player of the Week. It's been a good 3 days! My hard work has paid off, I guess, and I hope it helps get our team back on track.

Q: Given that the Storm are having a bit of a rough season (last in the Midwest Division), is it tough some times to balance individual vs. team accomplishments?

Beck: I just try to do everything I can to help out the team, whether it's score a goal, play good defensive hockey, or just be a leader on the team verbally. I'm just doing anything I can on and off the ice to get the team going. I know that if I can help a younger guy, that'll boost the team in the long run, so being a leader is something that I'm trying to focus on this season and hopefully that keeps up.

Q: You've got three games in four nights coming up this weekend, then the next two weekends you play games on three consecutive days. How do you keep your energy level up through those stretches?

Beck: It's tough, especially when you play a 7:00 p.m. game on a Saturday than a 2:00 game on a Sunday. You may not have the adequate sleep that you'd like. It's just managing your time and your body, each person has a different body and has to handle it their own way. For myself, I have to stretch, hit the cold tub, and get a good amount of sleep each night. I might not have the exact same amount of energy for each game in a weekend, but if I'm not having the highest-energy game, and I'm not helping the team in the offensive zone, I'll try and find something I can do with the little energy I do have to just help the team come closer to a victory any way possible.

Q: With just 41 games this season, as compared to 67 last year, you've already set new highs in goals and assists, and are currently 4th in OHL scoring. What's been the key to your increased production this year?

Beck: Playing with a lot more confidence - coming back from Nashville at the beginning of the year, the training camp served me well, and gave me instant confidence right from the start. I'm seeing the ice a lot better, and I have great linemates who are helping me out on the offensive side. It's also the consistency that builds confidence. I've been able to get on a couple point-scoring streaks and when you carry that into each game, that's something you want to continue. Having that confidence factor there every night, where you know that maybe you'll bury a couple goals, or get a couple assists... it's really been good so far this year.

Q: Have you had much contact with the Preds during the season, like (Director of Player Development) Martin Gelinas?

Beck: Yeah, Martin's been out a couple times this year, and this past weekend Assistant GM Paul Fenton was at one of my games. Jason Bukala (the Preds' OHL scout), I talk to him once or twice a week about how my games going. It's nice having a contact there. Now that I'm part of the [Nashville Predators] family, I can use all of those contacts and it's been really great.

Q: Heading into the draft last summer, did you have an indication that Nashville was interested in you?

Beck: I met with them at the NHL Combine, and that was probably one my best interviews, I thought. If I was going to narrow it down to 3-4 teams Nashville was definitely one of them. I had great vibes coming out of the interview, I was hoping for Nashville, and it worked out just great.

Q: Recently we had the World Juniors, and some Preds fans were disappointed to see that you were left off the Canadian team. Looking ahead, would you say that's a major goal of yours for next season, since you have one more crack at it?

Beck: It's definitely one of my goals. I knew I was a longshot this time, as they seem to take the players on their last year of eligibility, and that would be me for next year. I'm just trying to help my team as much as I can, and hopefully Team Canada scouts will see that and give me a kick at the can this summer at the development camp. Then hopefully, if I can come back with a good start to next season everything works out and I could get a chance. It's always been one of my dreams, and it's almost every other kids dream toplay for the national team.

Q: For Nashville fans who haven't gotten the chance to see you play yet, can you describe yourself as a player? Let's hear the scouting report on Taylor Beck.

Beck: I'd like to say I'm a power forward. I've got a big frame, I'm hard on the forecheck (Dirk: thanks for the plug, kid) and like to turn pucks over. I'm good beneath the goal line and tough on the opposing defense, hard to knock off the puck. I'm strong on my skates, like to bring pucks to the net. I see my linemates well, which has really helped this year in getting my assist totals up, and I have a pretty good shot. Recently I've really been working on my defensive game, I know that's going to be a factor to take me to the next level and give me a chance to play in Nashville one day. I'm prepared to do anything to get there.

Q: It's funny because the Preds on their website have you listed as a left wing, the OHL stuff all has you as a right wing. As a right-handed shooter, do you have a strong preference for either side of the ice?

Beck: We have a lot of righties on our team in Guelph, so entering my draft year my coach had plans to play me on the left wing. I can switch to either side, but if I had to pick, I'd say left wing. I like coming down the wing that way to help my shot.

Q: And now I'm gonna put you on the spot, how about a scouting report for Michael Latta, who the Preds took just 2 picks after you?

Beck: He's a great player, he sees the ice real well, and he's a hard-nosed player who really gets under the opponent's skin. He can definitely drop the mitts, and he's always there to stick up for a teammate. He can help on the offensive side whether it's scoring a goal, set up a play, he's got good hands and sacrifices a lot for the team. He's great defensively, and is just an all-around team guy who will do anything for you.

Q: Do you get the chance to follow the Predators much as the season has gone along?

Beck: Yeah, the sports networks up here are pretty good at showing all the highlights, so I like to see how the Predators are doing. if they're winning or losing, and compare what they're doing with my game, to see what I need to do to make it there one day.

Thanks to Taylor for taking the time for this interview, and to Lindsay Pink with the Guelph Storm for setting this up and providing the photos used. For more on Taylor Beck, check out the interview that he did with Jeremy and Codey from The 303:30 a couple months ago. 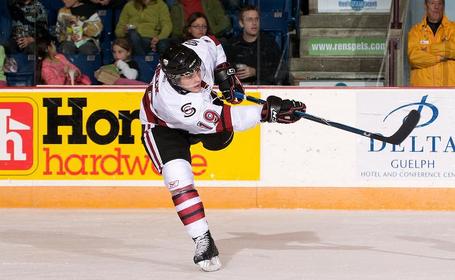