Should the Nashville Predators expect more goals from Jason Arnott?

Share All sharing options for: Should the Nashville Predators expect more goals from Jason Arnott?

In his segment on the Thom Abraham Show this afternoon, Nashville Predators head coach Barry Trotz talked about putting last week's 0-3 record behind them, the perils of Olympic distraction for some members of the team, and how to get captain Jason Arnott scoring goals once again:

The Arnott bit is most interesting to me, considering the criticism he draws from a portion of the fan base. Yes, in his last 15 games he has just one goal, but he does have 7 assists over that stretch, as well as 49 shots on net (Patric Hornqvist has 57 in his last 15, so they are both firing at will). In short, he's doing the right things, but is just going through a cold streak right now. He could just as easily pot 10 goals in his next 15 if he keeps doing what he's doing.

What I like to look at here is the Expected Goals that Arnott is piling up. "Expected Goals" are basically a measure of how many goals a player is likely to score, based on average opposing goaltending. The game of hockey being what it is, in the short run of a few games or weeks the randomness inherent in the game can make a shooter appear incredibly hot (like Mike Ribeiro a couple years ago) or stone cold (Patric Hornqvist last year).

Using Shot Quality, one can assign values to each shot, which represent the likelihood that it will result in a goal. For instance, a Wrist shot from 15 feet, which is not a rebound attempt, could be worth 0.14 Expected Goals, because it has a 14% chance of scoring. A similar shot that does come off a rebound would count for 0.34 Expected Goals, because rebound shots are much more likely to result in a goal.

Note that my Shot Quality model is not as refined as what you'll find at Behind the Net, but it's a far cry better than simply using Shots On Goal, and I have the advantage of dealing with raw data so I can break this down for an individual player, on a game-by-game basis.

What you see below is Jason Arnott's Expected Goals per Game for the season so far. The dotted line tracks individual game results, while the bold, solid line is a 5-Game Moving Average, to give an idea of how he's rolling. What I see here is a guy typically running between 0.2 and 0.5 Expected Goals per Game. Yes, he's had 3 relatively poor performances lately, but there are also three excellent ones in his last six, he's notching assists at a decent pace, and we don't know if his return from injury recently means that he's 100%, or just healthy enough to get by out there. 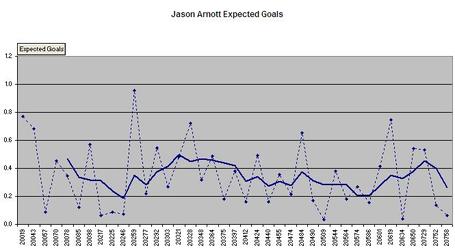 For the season to date, my model shows Arnott with 13.5 Expected Goals, with 12 actual goals scored. That's within the normal range of how the bounces go. Now, if we look at this a couple weeks from now and that trend line dips to a new low, I might be concerned. Not yet, though.

But that, of course, is my geeky view of things - are you seeing what you want out of big #19?