Share All sharing options for: Fantasy Hockey season is here!

As preseason games start to wrap up and NHL teams finalize their rosters, we hit a sweet spot in the hockey calendar which means it's Fantasy Draft time.

Last weekend I participated in two fantasy hockey drafts, one with a group of Nashville-area hockey fans and bloggers run by Paul Nicholson, and the other being James Mirtle's Hockey Blogger Invitational. Here at OtF, we're also getting ready to raise the curtain on our official league as well.

After the jump, take a look at some independent analysis that was done by FantasyHockeyScouts.com (the newest member of the SB Nation hockey family) of the Mirtle league's draft, and details of how you can join the official On the Forecheck Fantasy Hockey league for the upcoming season...

This is the 5th season that James Mirtle (formerly one of the most prominent hockey bloggers at FromTheRink.com, now a Toronto Maple Leafs beat writer for the Globe & Mail) has invited hockey writers from around North America along with a few of his Globe & Mail cohorts to face off in a fantasy hockey league which proves extremely difficult each season. In the past we've had as many as 20 teams with 18 draft rounds, meaning we've had to dig deep to find value towards the end.

James won the first two years of the league's existence, while Calgary blogger Kent Wilson has won the last two.

I've shared before my fantasy hockey draft strategy, which is to not focus so much on the projections for individual players, but rather make sure your projections match the scoring categories of your particular league, and with each pick, look for the position which faces the biggest dropoff in overall production relative to your next available pick. A tremendous resource to use on this front is HockeyPoolGeek.com, as they do the analysis for you, either using their own projections or your own which can upload.

That systematic approach (done by hand using Excel spreadsheets) led to a dominating finish in the 2007-8 regular season (my very first fantasy hockey league ever), before injuries hobbled my playoff run. The next year I took 2nd in the regular season and 3rd in the playoffs, before dropping off last season to a disappointing finish out of the playoffs.

Can I rebound this time around? Let's see what FantasyHockeyScouts.com had to say about my team, the Fab Forecheckers:

One of the best forward groups (Ovie, Iggy, Roy, Morrow) in the league.

Could lead the league in goals.

Should also do very well in shots, PIM's and blocks.

Only really offensive issue will be in number of assists.

Goaltending could sink this team... what happens if Leclaire plays like Leclaire?

Hornqvist was drafted way too early for a guy that had only 51 points last year... could have had Kessel, Eriksson, Burrows, Horton, Elias or Gagne instead.

I can certainly see his point on the Hornqvist pick, I'm not shy about projecting him for 35+ goals this season, while most observers have him pegged for the mid-20's. We'll see how it all shakes out!

Join the Official On the Forecheck Fantasy Hockey League

So are you interested in joining the 2010-11 edition of our site's official league? We run it on Yahoo, and have several positions open for the new season. I won last year's league with my "Nolensville Knights", but am ready to take on all comers.

If you're interested, email me at the.forechecker@gmail.com with the subject "Fantasy Hockey League" and let me know by midnight Saturday, October 2nd. Over the weekend I'll randomly select people to fill the remaining open spots, and I'm going to schedule an online draft for Wednesday evening, the night before the NHL Regular Season opens. That'll give you a few days to set your rankings if you can't be online for the actual draft, and also avoid drafting the Mark Streit-like players who suffer a calamitous injury before the first puck even drops.

The details? 12 teams, 16 draft rounds in a head-to-head Yahoo league.

Scoring Categories: For skaters, it's Goals, Assists, Plus/Minus, Penalty Minutes, Power Play Points, Shots on Goal. For goaltenders, we use Wins, Goals Against Average, Save Percentage, and Shutouts. 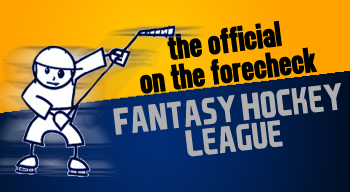 If you're looking for the best resources to get you ready for draft day, check out my recent reviews of McKeen's Hockey Pool Yearbook, DobberHockey.com, and also make sure to check out HockeyPoolGeek.com and FantasyHockeyScouts.com. All of these provide excellent ways to not just get your started on the season, but keep on top of things all year long.

To keep up with all of our coverage of the Nashville Predators, you can subscribe to the RSS feed, follow us on Twitter (@Forechecker, @predatweeter, @SLakePreds & @Short_Shifts) or catch the site on Facebook (now at www.facebook.com/OnTheForecheck). You can also email me at the.forechecker@gmail.com.