The Nashville Predators went into the United Center tonight perhaps looking for a small measure of revenge on last season's Game 5 debacle. While it didn't always go well, the end result was beautiful. Joel Ward scored the game winning goal with less than a minute on the clock, while Steve Sullivan and Colin Wilson also had markers. It was Anders Lindback's first career NHL victory.

Follow after the jump for reaction and the video highlights...

The St. Louis Blues make their first visit to Nashville Thursday, and the Flying Ovechkins (err... the Washington Capitals) come in Saturday. Use this special offer for OtF readers to save money on Nashville Predators tickets for these, or any other home games this season.

So much of this game boiled down to the strengths of each team. For Chicago, speed and puck movement led to dangerous chances and two 1st-period goals, while the Preds capitalized on loose pucks and solid play at the blueline to keep the Blackhawks hemmed in at times. Anders Lindback looked like a rookie all too often, leaving rebounds available, but on the whole acquitted himself rather well considering the circumstances.

Despite the conventional notion that you'd like to get off to a good start on the road, in front of your rookie goaltender, the Preds coughed up the advantage after Patrick Kane burst through the middle on a give-and-go, causing Joel Ward to take a Hooking penalty. Kane converted on the power play shortly thereafter, putting the Blackhawks up 1-0.

Fortunately, Nashville got right back into things on an ensuing 4-on-4 situation, when a smart chip of the loose puck by Cal O'Reilly led to an opportunity for Steve Sullivan, he gathered it in and picked his spot with a nice wrister to tie the game. Towards the end of the period, however, a total team breakdown led to a Jonathan Toews goal; you can argue over who was most to blame, but you could pin that one on multiple parties.

After holding on through a scoreless (and at some times listless) second period, the Preds tied the game back up again early in the third as a quick Colin Wilson shot was deflected by Blackhawks goalie Corey Crawford.

Chances continued to get exchanged throughout the last frame, though Nashville seemed to tilt the ice in their favor fairly well. Lindback did just enough to get the Predators to the last few minutes, when Nick Boynton went to the box for delay of game. That would prove a fatal mistake for Chicago.

Nashville went on the man advantage, but to be blunt, fans didn't give them much of a shot to pull it out before overtime. Those doubts were erased, however, when J.P. Dumont rifled a gorgeous pass to Joel Ward, who made no mistake in putting the puck past Crawford for a 3-2 Nashville victory with just 27 seconds left on the clock. In his postgame interview, Ward donned this hat (of which I completely approve), apparently known as the "Honky Tonk Hat" for hardest worker. Joel might want to get used to wearing that. 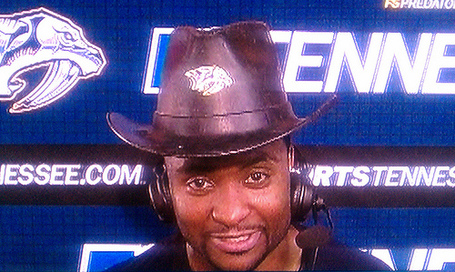 No, the penalty kill wasn't perfect, and Lindback had some heart-stopping moments - but overall, it was a very solid win for a Nashville team who moves to 2-0 on the season. They can't take too much time to celebrate, though, as St. Louis rolls into town tomorrow.

Some thoughts out of this one:

The advanced stats will have to wait, as I have a game to go play tonight. For now, here are your video highlights (they may take a few minutes after the game before coming available)...

Be sure to "Like" our site on Facebook (now at www.facebook.com/OnTheForecheck)! To keep up with all of our coverage of the Nashville Predators, you can follow us on Twitter (@Forechecker, @predatweeter, @SLakePreds & @Short_Shifts), and if you have any questions, feel free to email me at the.forechecker@gmail.com.