In a new feature that may or may not become a regularity, I'll break down an important goal from the previous night's game frame-by-frame, pointing out errors, positives, and whatever else jumps out.

Last night against St. Louis, the Nashville Predators continued their early season power play success by going 2/3 on the evening. In years past, you saw a lethargic squad, particularly at 5-on-3, whose feet wouldn't move and whose passes were sloppy.

After the jump, we'll look at Steve Sullivan's marker on the 2 man advantage that made the game 2-0 Nashville. It was nearly picture-perfect - good movement, an even better pass, and an accurate finish. 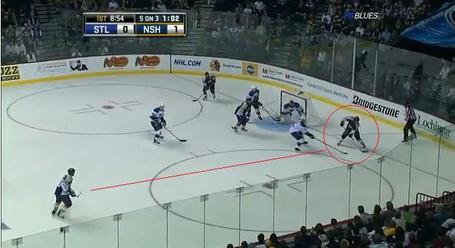 The sequence is started by a good zone entry from Weber and Suter. The play takes a minute to set up, but Cal O`Reilly receives the puck from Suter and finds time below the net to slow the play down. Couple things to note here: 1) the Blues defender taken out of the play to cover Hornqvist - a good screen does more than block the goalie; 2) Steve Sullivan lurking on the back door. Seems harmless enough, right? 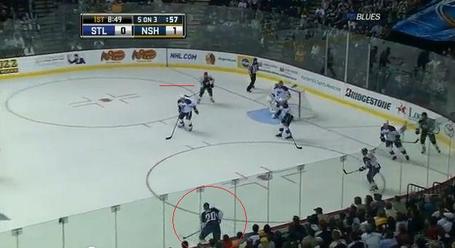 O'Reilly now sends the puck back to Suter, and Hornqvist peels off to the side, forcing a penalty killer with him. The Blue directly in front of Halak has to guard against a shot from Suter, and the player in the middle of the ice clearly has to be ready for a Weber (not pictured, but near the blueline) blast. Sullivan still waits, but the ice is beginning to open up with the movement of Hornqvist and O'Reilly. 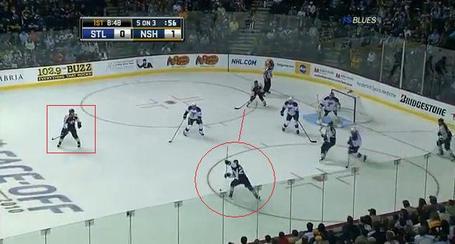 Notice now Hornqvist moving back towards the net, causing a defender to follow. The PKer between the dots obviously is still keyed on Weber, because its a fatal mistake that allows him a free shot. Suter winds up for a shot, which takes the Blue in front of the net out of the play and thus away from Sullivan. 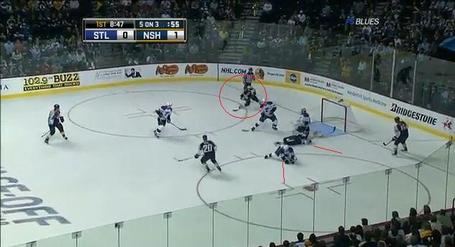 What happens next is equal parts bad penalty killing and a phenomenal pass from Suter. One Blue commits to the shot too early, and falls down to block the puck that never came. The player to Halak's right is covering Hornqvist, and unable to turn around fast enough to get a stick in Sullivan's way. As for the other Blue on the ice? We can only assume he's still waiting on Weber to shoot.

Suter backs out of his slapshot and rifles the puck to Sullivan, who is already in a position to shoot. Halak, keyed in on Suter like the rest of his defense, finds it impossible to cross the crease fast enough to stop the shot. 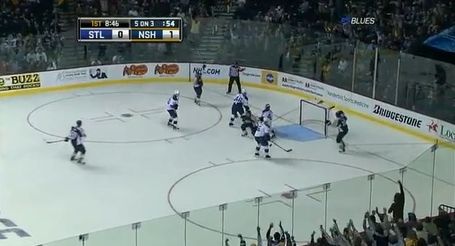 Sullivan, to his credit, makes no mistake about the shot. That said, this goal wasn't a product of the finishing. Cal O'Reilly kicked things off with good puck control below the circles, and Patric Hornqvist was able to keep the defense distracted by moving back and forth on the ice while Sullivan waited all alone. The threat of Shea Weber certainly helped, but Ryan Suter's decision and ability to find the open Sullivan was the final nail in the coffin.

It was just one instance, but one that we rarely saw last year. Let's hope the trend continues. Full-speed video between the :59 and 1:12 marks of the following video: