Upon Further Review is a new feature in which we'll go into the film room and break down a key play from the previous game on a frame-by-frame basis, be it a goal, goal against, or outstanding defensive play.

In today's lesson, class, we'll look at the power play tally by the Washington Capitals in overtime of the Predators' 3-2 loss. Nashville's penalty kill has struggled all season, and this particular play was no different. As many goals against are, this was a team effort, with errors from Shane O`Brien, Jerred Smithson, and Francis Bouillon. The goal was scored by Brooks Laich, and assisted by Alex Ovechkin and Nicklas Backstrom.

Key: players boxed in are defenders, those in circles attackers, and the lines point out something else of note. 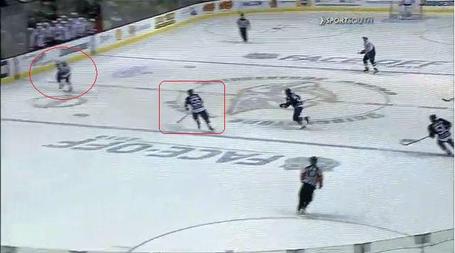 Even at the beginning of the sequence, we already have a problem. The play starts with a zone entry pass from Ovechkin to Backstrom. Shane O`Brien and Jerred Smithson are skating along in the middle of the ice too close together, which allows Backstrom to enter the zone unchecked. At this point, leaving Ovechkin uncovered is not too egregious. 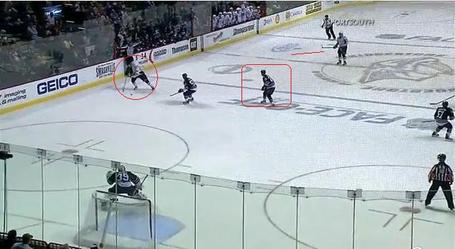 Backstrom, to his credit, is one of the best controllers of the puck in the NHL. That said, O'Brien is playing too far off (which will become more apparent in the next frame) to make any effort at blocking a pass or shot. Smithson can't seem to decide whether to follow the puck, or keep an eye on Ovechkin. Indecision would prove fatal... 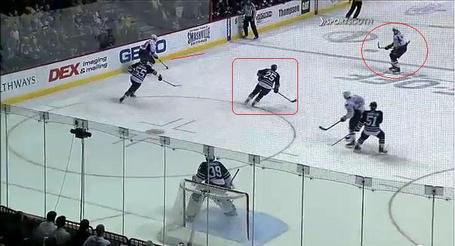 The distance between O'Brien and the puck-carrier now allows Backstrom to turn and freely get the puck to Ovechkin, who possesses one of the best shots from a forward in the league. We're still not entirely sure what Jerred Smithson is doing - he's too far from Backstrom to block the pass, and not close enough to Ovechkin to get in the way of a shot. Notice Brooks Laich and Francis Bouillon entering the screen on the right. 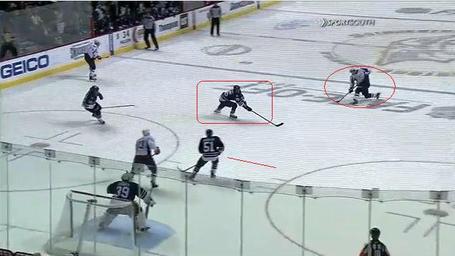 Ovechkin, as you might expect, takes a slapshot. Smithson flails wildly to try and block the shot, but previously being out of position handicaps any effort at doing so. Bouillon was tracking Laich nicely, until it was apparent Ovechkin's blast was incoming, so he turns to stop the shot. Unfortunately, that was Smithson's responsibility, and Bouillon leaves Laich with entirely too much room to work. 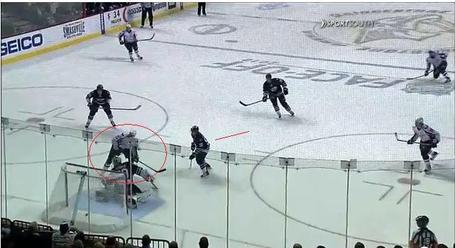 As you can see, Bouillon gets turned around, enabling Laich to redirect the point shot past Anders Lindback without much trouble. While O'Brien perhaps could've played Backstrom better and Bouillon stayed with his man, this game-losing goal may ultimately be on Jerred Smithson, who gave too much time to the world's best offensive player. Oops.