Weekend notes: Yahoo! Sports leads the race to the bottom

Share All sharing options for: Weekend notes: Yahoo! Sports leads the race to the bottom

You've already read your Game Day Preview to set up the Predators' big road test tonight in Dallas, right? Good, so now it's time to catch up on the rest of your hockey news...

Follow after the jump as Yahoo! Sports takes their sports coverage down a very troubling road, a local reporter has some fun at the expense of The Tennessean beat writers, and we hear of troubling attendance figures in a traditional hockey market... Moscow, Russia.

The Mississippi River Scum St. Louis Blues come to town next Thursday to take on the Preds. Use this special offer for OtF readers to save money on Nashville Predators tickets for this, or any other home game.

"Why the Nashville Predators Are the Worst Team in the NHL" | PredsBlog
Sam highlights the steaming pile of tripe that Yahoo! Sports is now featuring as "news" on its NHL team pages. That first story you see under "Recent News"? It's just a blog post written by... well, it could be anyone. I'm all for providing platforms for input, but pushing stuff to center stage like this is a horrible decision by Yahoo. 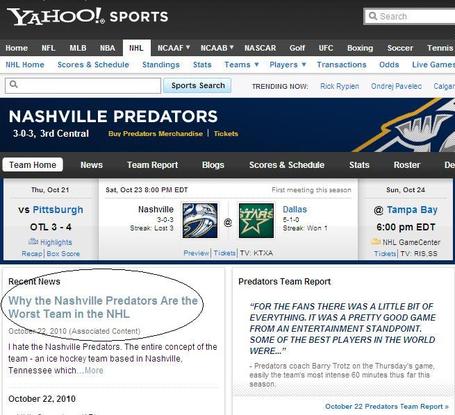 Yup, that's a (rather crappy) user-submitted "article" which is presented as the leading news story related to the Nashville Predators. Following it in the list of Recent News are several legitimate AP stories providing game recaps, injury reports, etc. If Yahoo wants to allow people to publish such content on their platform that's one thing, but presenting it in this manner is absurd.

Game Preview #7: Nashville Predators Visit Dallas Stars - Predlines
One of our only sources of info for tonight's game will be the @Predlines Twitter account, since Amanda (I presume) will actually be in Dallas this evening.

Paul McCann - Debate? What Debate? ... and a Blacked Out Game Night
Paul McCann's all fired up this morning, I was considering a screed myself but just reading his got it all out of my system!

A Tasty Non-Dairy Dessert or a Tasty Canadian Forward? | Pith in the Wind
J.R. Lind (who has never been in my kitchen) gives The Tennessean beat writers their just desserts for a gaffe in their recap of Thursday's night's game.

Predators get needed offense from David Legwand, Joel Ward - The Tennessean
Usually an even Plus/Minus rating isn't much to get excited about, but given the opposition that Leggy & Ward face every night, it's an impressive achievement.

Moscovites Walk Away from Struggling Teams - Puck Worlds
Three KHL teams in the Moscow area are playing to sparse crowds, often fewer than 2,000 people. On one occasion, a recent game drew only 800. Don't worry, Radulov's paychecks aren't bouncing though... yet.

The Making of a Legend – Daniel Alfredsson " SenSay
Congrats to the Ottawa captain for notching his 1000th career NHL point last night.

Rethinking the game - The Globe and Mail
Soon we'll have a hypnotist in the locker room, planting suggestions in players' heads. "You are Wayne Gretzky..."

Probert book reveals life of sex and drugs - The Globe and Mail
Famed enforcer Bob Probert was working on a memoir when he passed away last summer, and it's going to hit bookstores soon.

Saskatchewan mourns youth hockey player's death - The Globe and Mail
Tragedy strikes as a 17-year-old boy collapsed during a 3-on-3 scrimmage Thursday night.

Make sure you join us on Facebook! To keep up with all of our coverage of the Nashville Predators, you can follow us on Twitter (@Forechecker, @predatweeter, @SLakePreds& @Short_Shifts), and if you have any questions, feel free to email me at the.forechecker@gmail.com.