It's a 5:00 p.m. Central start in Tampa for our intrepid Predators, and thankfully, this game will actually be on TV. So follow after the jump and get yourself ready for some REAL Sunday afternoon sports action, as the Nashville Predators face the Tampa Bay Lightning...

After an infamous Twitter controversy over the summer, the former Predators goaltender has inspired not one, but two parody accounts which build off his ill-conceived commentary on the financial struggles of professional athletes. Will we see something like "Whoa, Shea didn't shoot this hard in practice! #DanEllisProblems" during today's game?

They offer some funny stuff, though:

dellis39 Tried to take a picture of mike smith in the shower to send to jenn sterger. can't see the shower from the bench.

fakedanellis My cat is refusing to use the new gold-dust litter I bought.#DanEllisProblems

dellis39 In my opinion, @Sullivan26 could dunk on Martin St. Louis. On a 7 foot goal. In the shire.

fakedanellis I'm pretty sad you guys. I just found out they're not going to let me put "Elli$" on my jersey. #DanEllisProblems

The boys keep on rolling despite mounting injury troubles, having escaped Dallas last night with a 1-0 win, but losing J.P. Dumont in the third period to a lower body injury that has him "day to day". On top of missing Matthew Lombardi and Marcel Goc already up front, the Preds will have a tough time fielding two complete scoring lines.

One key to today's game is how Barry Trotz works the matchups for the David Legwand line. The Lightning will have the last change since they're at home, and with their scoring depth, they should be able to get their top scorers out against other Nashville units, keeping them away from Leggy and Joel Ward.

This one's going to be an interesting call. With only 22 hours from one opening faceoff to the next, do the Preds go with Anders Lindback and let Pekka Rinne catch a rest? Or do they ride Pekka's hot hand, building off his 30-save shutout from last night? Prudence, in my opinion, would give Lindback the start: 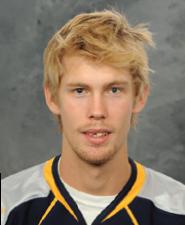 Assuming J.P. Dumont is held out of this one, Sergei Kostitsyn is likely to slip back into the lineup. The only question, then, is whether Teemu Laakso is still required to dress as an emergency D, or does Wade Belak get in and they go back to 12 forwards and 6 defense? My guess...

The Lightning are tied along with Detroit and Nashville with 11 points in 7 games to lead the NHL at this point, validating the buzz that built up over the summer after Steve Yzerman took over their front office, and Guy Boucher stepped into the head coaching job.

Tampa boasts the leading offense in the NHL right now with 3.43 goals per game, while the Preds give up the third-fewest, at 2.00. They've got lots of star names up front with former Rocket Richard Trophy winner Vincent Lecavalier, former Hart Trophy winner Martin St. Louis, 50-goal scorer Steven Stamkos (who has a sizzling 14 points in 7 games), and now the former Philadelphia Flyers sniper Simon Gagne added to the mix. Gagne has no points in 6 games so far, but is widely expected to give Tampa elite scoring ability across their top two lines.

The defense is a bit of a work in progress, as former 2nd-overall draft pick Viktor Hedman rounds into form. The big Swede (6-6, 230 pounds) had a steady rookie campaign, and is now looking to assume more responsibilities as elder statesman Mattias Ohlund has been sidelined with a knee injury. One of the savvier off-season acquisitions in the entire league was Tampa's pickup of Pavel Kubina, who returns to the Lightning as a potentially huge boost to their power play.

SB Nation's Tampa Bay Lightning blog, Raw Charge, hasn't been too impressed with their duo of Dan Ellis and Mike Smith so far:

We wait to see which goalie, Smith or Ellis, will rise to the challenge. Both have had their good and bad moments, but neither have looked spectacular. It's also important to give a glance toward Norfolk and acknowledge Cedrick Desjardins waiting in the wings. Desjardins, an AHL veteran who excelled under Guy Boucher last season in Hamilton (29-9-4, .919 save percentage, 2.00 GAA), has yet to make his NHL debut.

I shudder at the thought of predicting individual games, but this one's going to be extremely tough for the Preds. Suffering yet another injury loss, while playing just 22 hours after last night's opening faceoff in Dallas is a tough challenge already (this is one of the toughest back-to-back sets faced by any NHL team this year), but taking on an elite offensive club just throws gasoline on the fire. I'll go with a valiant effort but a 4-2 loss.