Share All sharing options for: Sergei Kostitsyn's first goal as a Nashville Predator - Upon Further Review

Upon Further Review is a feature in which we'll go into the film room and break down a key play from the previous game on a frame-by-frame basis, be it a goal, goal against, or outstanding defensive play. Previous editions can be found here (10/18) and here (10/15).

Today's video review takes us to last night's 4-3 win over the Tampa Bay Lightning, which vaulted the Nashville Predators into first place in the entire NHL. It was a pretty wild game, with Shea Weber scoring his first regular season goal as captain and Cody Franson completely embarrassing Dan Ellis.

That said, the goal which best exemplified a team effort was probably Sergei Kostitsyn's first goal in a Predators uniform. It was an example of Nashville's depth outplaying Tampa's, which is something you'll probably see all year. Follow after the jump for your frame-by-frame breakdown. 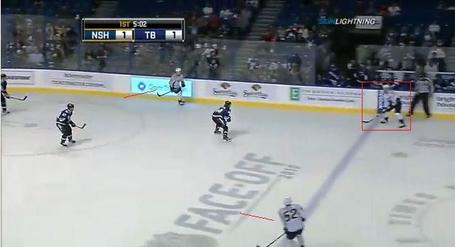 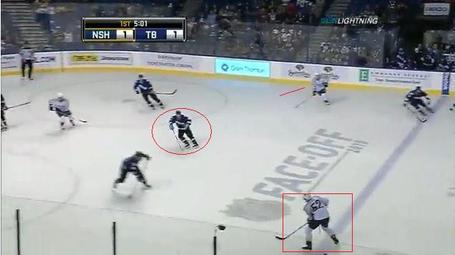 Sulzer receives the pass, and Smithson wheels off the boards to get in position. The Tampa defender by the blueline is taken out of the play when he elects to chase Franson, while the Lightning player I've circled is in no-man's land, enabling Sulzer to send Smithson the puck with no problem. 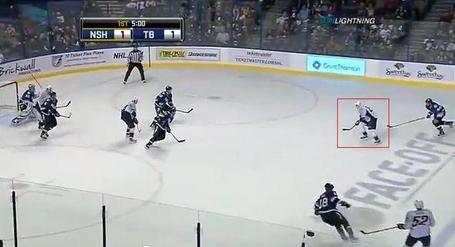 Smithson takes the puck and turns, having pretty much all day to shoot because the Tampa defenders rushed Nashville's point men, which in turn put them out of position to make future plays. Nick Spaling moves to the front of the net, doing his best Patric Hornqvist impression. 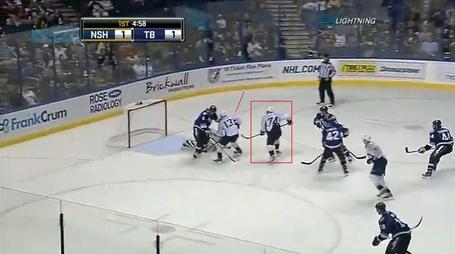 Spaling's screen of Dan Ellis causes havoc once Smithson's shot reaches the net, and no one can seem to locate the puck - except Sergei Kostitsyn. SK74 slides around to the right of Ellis, drawing no defenders - they're still trying to get back into the play. 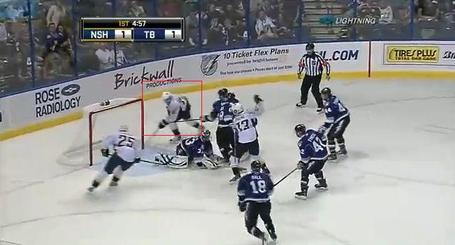 Kostitsyn slides the puck past Dan Ellis for his first goal of the year, putting Nashville up 2-1. As you can see, three Predators are down near the Tampa net, with only two Lightning players close by. Nashville scored here through a combination of Kostitsyn's excellent reaction, Spaling's screen, and some...interesting defensive positioning by Tampa Bay.