Gabriel Bourque - a Report From Up North

Share All sharing options for: Gabriel Bourque - a Report From Up North 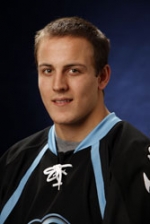 He's the youngest player on the Milwaukee Admirals roster, and the only one from Nashville's 2009 draft class playing in the AHL this year. Yet Gabriel Bourque is out on the ice killing penalties late in close games.

"I think he's been terrific night in and night out."

Those are Admirals head coach Lane Lambert's words, but they really could be attributed to anyone that has seen him play so far this season. "I love his performance so far.  I think he's been a tremendous asset to our hockey team.  He is relentless, he's got speed, and right now he's playing in a role where he's providing energy for us.  But I know that he can provide offense too.  And his opportunities in that area are going to present themselves before too long."

About 20 hours after Coach gave me that quote, Bourque scored his first professional goal.  You can see it in this highlight package here, with the play starting around the 6:35 mark of the video.

For Bourque, he's making the adjustment from the QMJHL to the AHL look easy, but appreciates the challenges he faces today. (Please be advised...he's a Quebec guy, so his English is a bit broken)

"Guys are more physical, more bigger, and quicker.  So I have to be more quicker around the net and around the border.  And learning a new system...I didn't play in the system last year.  It's pretty new for me, but the coach really helps me, and I appreciate everybody helping me."

What kind of feedback is he getting from the Coach Lambert so far?

"He tells me every day to work and be better every day, to learn every day.  And that's what I try to do, and play hard and play my style."

His particular style is something that every team wants, and is an amazing asset when applied correctly to the NHL games.  Assistant GM Paul Fenton offers up these thoughts:

Every team can use a pest.

"The best thing that Gabe does, he's got second and third effort no matter what happens," Fenton says.  "He's staying with pucks, he's making it miserable to play against."

Bourque is the second smallest player on the team in terms of height (listed at 5-9, an inch taller than Linus Klasen), and according to Fenton, one of the things he'll need to work on while in Milwaukee is his strength.

"He's just got to get stronger, he's got to learn the defensive side of the game a little bit.  We've got him killing penatlies.  And as he gets older and chips pucks in and goes and gets it, we see him as being a good role player for us."

So far so good, then, for Bourque.  You notice him every time he's on the ice, and it's for the good things he does instead of turnovers and dumb stick infractions.

Over at the Admirals Roundtable blog, we like to end our posts with some questions for discussion.  So for this post, who do you think have been some of the most effective pests in the last 20 years in the NHL?  My first vote goes to Esa Tikkanen.