Share All sharing options for: Into the Film Room: Patrik Berglund's 3rd period goal against Nashville

Into the Film Room Upon Further Review is a feature in which we'll break down a key play from the previous game on a frame-by-frame basis, be it a goal, goal against, or outstanding defensive play. Previous editions can be found here (10/18), here (10/15), and here (10/25).

Unfortunately, this edition of our frame-by-frame breakdowns brings us to a vital error by one of the Nashville Predators' all-world defensemen - this time, team captain Shea Weber was at fault. It wasn't the game winning goal, and it wasn't shorthanded, either, but it was a telling moment in a game which saw Weber skate over 26 minutes. It was late in the game, and Shea was visibly tired on the ice.

That's not really a legitimate excuse here, though, so follow after the jump where we break down Patrik Berglund's 3rd period goal and just what went wrong.

Also on the ice for St. Louis were Erik Johnson and Eric Brewer. Nashville iced Francis Bouillon, Shea Weber, Cal O`Reilly, Steve Sullivan, and Patric Hornqvist. Defenders are in boxes, while attackers have been circled. 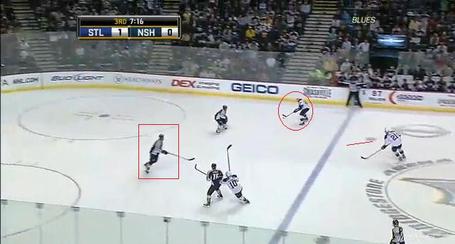 As the Blues enter the zone, you can already tell that things are about to go wrong. Brad Boyes carries the puck in and is watched well by Francis Bouillon, and Cal O'Reilly is doing a good job backchecking Andy McDonald. Shea Weber, though, puts too much focus on the puck carrier and doesn't track the trailer on the play, Patrik Berglund. 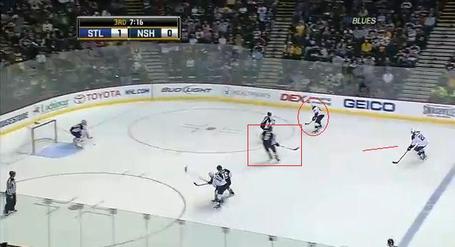 At this point, Weber turns his complete attention to Boyes - bad move. Berglund (near the blue line) is able to waltz in unimpeded behind the play. If Boyes were to release a shot, Berglund would have time to read the Saturday morning cartoons and still pick out the rebound. O'Reilly and Bouillon remain well positioned. 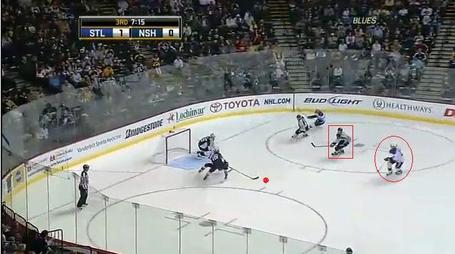 Unfortunately, that's exactly what happens. Boyes puts the shot on net, and Pekka Rinne allows a big rebound. Weber is forced to turn much faster than if he had been keeping an eye on Berglund, who simply skates to the puck (highlighted) with no one around to stop him. 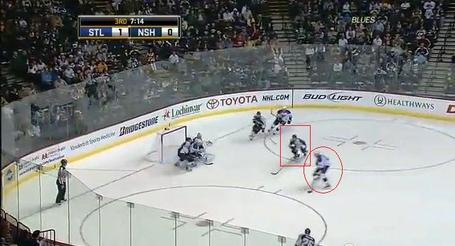 Berglund corrals the puck, and takes his time picking a spot to shoot. Weber is still attempting to recover from bad positioning, and really never had a chance to get over and block the scoring attempt. The problem really begins as the play materializes, when Weber decides to help Bouillon with Boyes instead of keying in on the trailer. 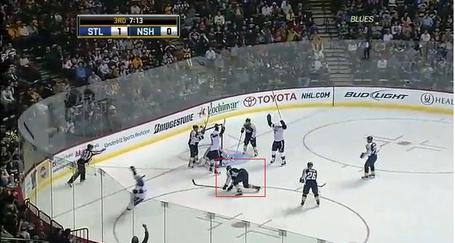 Patrik Berglund, to his credit, follows through with a very well-placed wrister. It beats Rinne for two reasons: 1) the semi-screen of Andy McDonald, and 2) the decision of Shea Weber to track the puck instead of his assignment. This goal is an example of what happens not when the entire 5-man unit breaks down, but when one player makes a vital mistake. You won't see this often from Shea Weber, but this time it hurt the Predators.