You've got to to love The Tennessean's headline this morning over their coverage of last night's game in Detroit (from the Associated Press, as they didn't send Josh Cooper along). 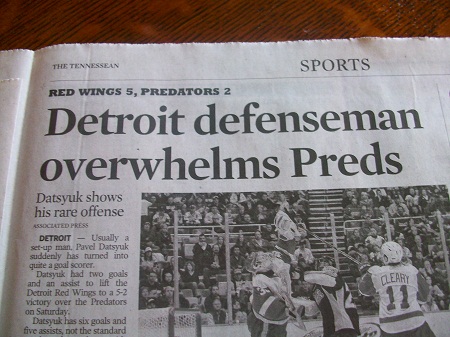 "Detroit defenseman overwhelms Preds", followed by "Datsyuk shows his rare offense". This, despite the fact that Datsyuk (one of the NHL's elite centers) has scored between 27 and 32 goals for each of the last six seasons. And by comparison, for the last seven seasons, he's had more total points than that year's leading Nashville Predator.

Maybe the whole "We Want Crosby" thing was just the start of a fun new trend in sports writing?