Share All sharing options for: Into the Film Room: Brad Stuart's 1st period goal against Nashville

One of the biggest products of Ryan Suter being out of the lineup for an extended period for the Nashville Predators has been other defensemen being forced to play higher amounts of ice time (Suter led the team in ATOI), particularly young players like Alexander Sulzer and Cody Franson. In these cases, more responsibility can mean more errors, especially in the case of Franson, who is very good in the attacking zone but prone to being taken advantage of quite often defensively.

It's with that in mind, then, that we take a look at this 1st period goal from Saturday's game against the Detroit Red Wings. When the play starts, its only 1-0, but things would very soon change with a goal from Brad Stuart.

Also on the ice for Detroit were Todd Bertuzzi and Valteri Filppula. On the ice for Nashville were Cody Franson, Martin Erat, Alexander Sulzer, Nick Spaling, and Steve Sullivan. 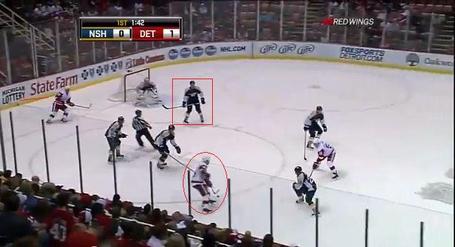 Todd Bertuzzi carries the puck up the wall and draws - count 'em - three defenders, with Cody Franson also watching from afar (boxed in). Now, Bertuzzi is a good player, but three players is excessive. Franson's inattention to Johan Franzen sneaking up on Pekka Rinne from behind the net is something to keep an eye on. 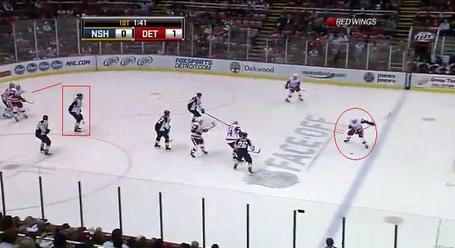 In this frame, Bertuzzi has fed the puck to Nicklas Lidstrom, who is teeing up the shot. Bertuzzi has occupied two defenders, which allows Lidstrom to get the shot off without any effort. The bigger problem, though, is Cody Franson (and to a lesser extent Martin Erat) being apparently unaware of Franzen parked directly in front of Rinne. 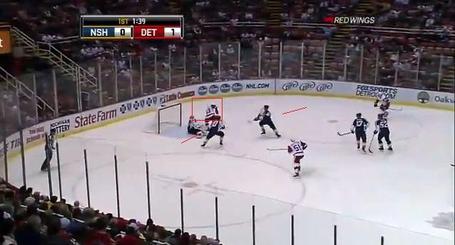 Lidstrom has a quick release, and by the time the shot reaches the net, its far too late for Franson or Erat to do anything about Franzen gobbling up the rebound. Franzen won't score the goal (Brad Stuart does after a brief scrum), but this sequence was effectively over when Lidstrom shot the puck, thanks mostly to Cody Franson and Martin Erat standing alone in the middle of the ice instead of clearing out their goalie's crease.

It wasn't the game winning goal, but it might as well have been. At 1-0, the Predators still have a very good chance at getting back into the game. Franson's mental mistake, though, means that Nashville would fall into a 2-0 hole that would prove impossible to climb out from against a very solid Detroit team.