Into the Film Room is a feature in which we'll break down a key play from the previous game on a frame-by-frame basis, be it a goal, goal against, or outstanding defensive play.

At long last, we come to a positive edition of our frame-by-frame analysis. The Nashville Predators finally broke their losing streak last night in a 3-2 victory over the St. Louis Blues. It wasn't that pretty, but it was a win - and at the end of the day, those are the only things that matter.

After the jump, we'll look at the Preds' first goal from last night via Cal O`Reilly. There was some poor defense from the Blues, but most of all it was a great play from O'Reilly and Patric Hornqvist to storm the net and create problems for St. Louis... 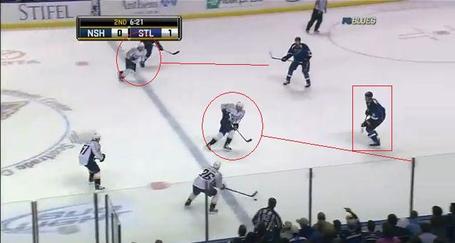 The sequence begins with what is really a near-perfect zone entry. Steve Sullivan brings the puck in onside, while O'Reilly and Patric Hornqvist do what leads to success - go to the net. Hornqvist's (top of the frame) movement takes two Blues with him, and Eric Brewer is left to focus on the puck carrier. This leaves O'Reilly with a free pass. With all the defenders occupied, Francis Bouillon (neutral zone) is able to move into position to accept a pass. 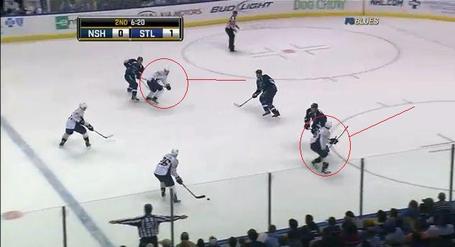 To this point in the game, Patric Hornqvist had very clearly gotten underneath St. Louis' skin. He'd been buzzing the net all night long, and the Blues were well aware of his capabilities. His race to Jaroslav Halak on this play drew two defenders, which was subpar defense on the Blues' part, but more of an indication of Hornqvist's influence even when not scoring goals. That meant two things: a) that Francis Bouillon was wide open at the left point and b) Cal O'Reilly was able to slip past Eric Brewer, who had a choice to either watch O'Reilly or the puck. 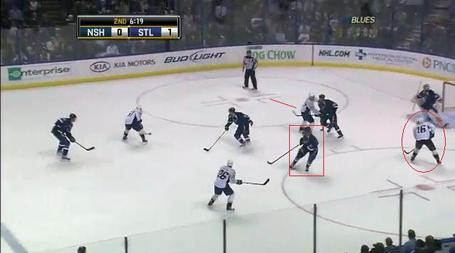 Brewer, of course, chose the puck. Sullivan immediately feeds the puck to Bouillon, left open, again, because of Hornqvist's ability to move his feet. Not only has Hornqvist taken two players out of the play, but he's now screened Halak in the event of a shot. Brewer's decision meant that O'Reilly was able to park short side, totally unmolested. 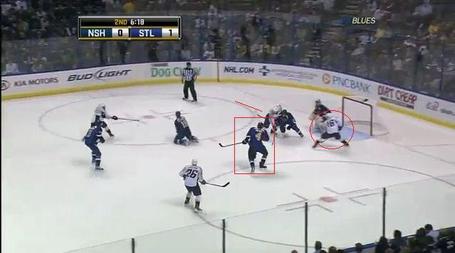 Here, Bouillon releases the shot, which Halak is unable to see thanks to Hornqvist. The puck bounces around in the scrum, and pops out to a waiting O'Reilly, who at this point has Brewer completely turned around. Halak has, justifiably, been focused in on the shooter. His defenders let him down here, but it was an excellent play by Hornqvist and equally good sense from O'Reilly to move into an open position where the net would be empty. 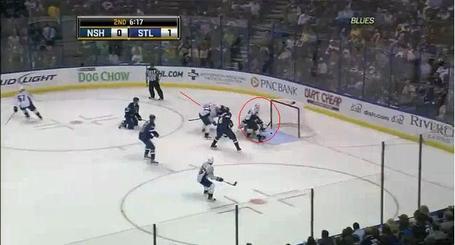 And there, readers, is Cal O'Reilly's 3rd goal and team-leading 12th point of the season. Patric Hornqvist somehow got an assist on the play, but his continued insistence upon crashing the net was what ultimately allowed the Predators to score.