Share All sharing options for: Into the Film Room: Shane O'Brien's 2nd period goal against Chicago

Into the Film Room is a feature in which we'll break down a key play from the previous game on a frame-by-frame basis, be it a goal, goal against, or outstanding defensive play.

As the Predators are getting back to their winning ways, more positive plays are available for us to break down and show you just how things came about. In today's frame-by-frame analysis, we're going to take a quick look at Shane O`Brien's 2nd period goal against the Blackhawks on Saturday. The marker had fans raving over Marcel Goc's play, and justifiably so, but was something besides O'Brien and Goc a key component? Follow below to find out. 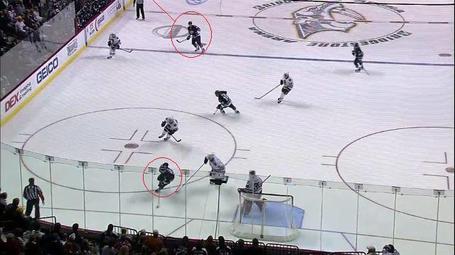 Marcel Goc carries the puck behind the net and does a great job keeping it away from the defender, but note Kevin Klein at the top of your screen heading off for a line change. Another thing to keep in mind in this frame is all four Hawks defenders keyed on Goc. 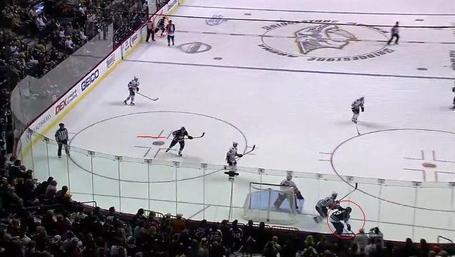 As Goc circles behind the net, Shane O'Brien comes onto the ice for Klein. Note also Martin Erat's position and that all three Hawks defenders have their backs turned to not only O'Brien but Erat also. 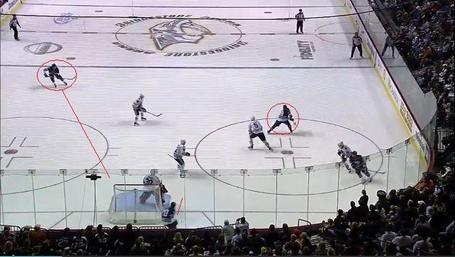 Goc, to his credit, does a magnificent job of controlling the puck and drawing attention to himself, but this is some strange defense. O'Brien storms the net to Turco's far side, completely uncovered. With the defenders so focused on Goc, Erat is able to do his best Patric Hornqvist impersonation in front of Turco. 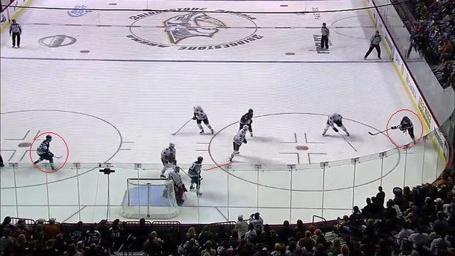 As Goc releases his assist, there's now a defender on Erat and one turning to catch O'Brien. Its much too late, however, and it looks like Erat's screen blocks at least part of Turco's view of the puck and its path. 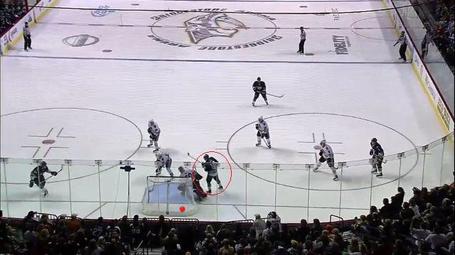 What leads me to believe Turco couldn't see the puck was that he didn't turn from Goc at all, even when the puck is in the back of the net. It was a fantastic feed from Goc, obviously, and O'Brien showed great awareness to go to the net on a line change, but you have to wonder if Erat's blocking Turco's vision had more to do with this goal than meets the eye.

At any rate, while there was some questionable defending, this goal was created by the Predators in a 4-on-4 situation where they are normally poor. Marcel Goc did the work, Martin Erat provided the distraction, and Shane O'Brien the hustle and good finish.

(and no, I'm not sure how Klein got an assist, either.)

Video of the goal here: