Share All sharing options for: Into the Film Room: Rick Nash's 2nd period goal against Nashville

In last night's shutout loss to division rivals Columbus, both goals against came off odd-man rushes, which is a disappointing thing, but not necessarily because a defenseman misplayed the rush. Very often, the breakdown begins at the very beginning of the play, which is what springs the opposition into attack.

Follow after the jump for an example of this on Rick Nash's 2nd period goal. 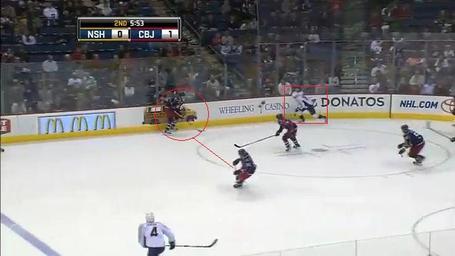 As the Jackets prepare to exit the zone, Nash delivers the pass to linemate Jakub Voracek. Cody Franson and Shane O`Brien (not pictured) are well positioned to deal with the rush. Cal O`Reilly's responsibility, temporarily, becomes the third man, Derek Brassard. 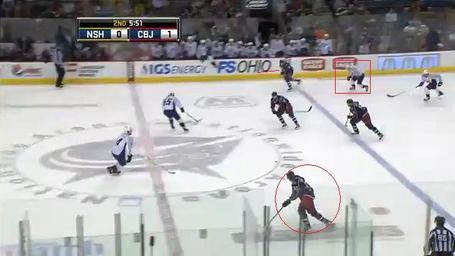 Voracek skates the puck up the wing, covered adequately by Franson. O'Brien, near the center circle, will look to pick up Brassard coming through the middle. O'Reilly is still behind Nash, and hasn't committed himself either way defensively. 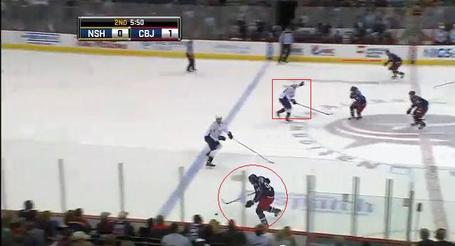 O'Brien (boxed), sees the odd man rush developing and clearly signals to O'Reilly to pick up Nash coming down the right wing so he can keep Brassard from the front of the net. Franson continues to play Voracek well, keeping to his right to prevent him from cutting in too easily for a shot. 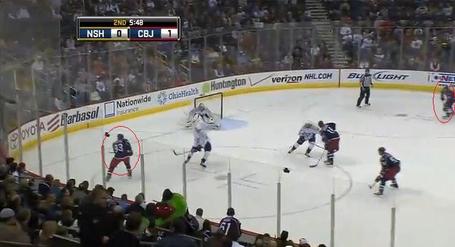 Here, O'Brien has Brassard completely neutralized, but Franson probably plays Voracek's cross-ice pass a bit too lightly. It matters little, though, because one of the league's most dangerous goal scorers is waiting to receive a pass with most of the net to shoot into, because O'Reilly failed to track back well enough to even begin to prevent a shot. 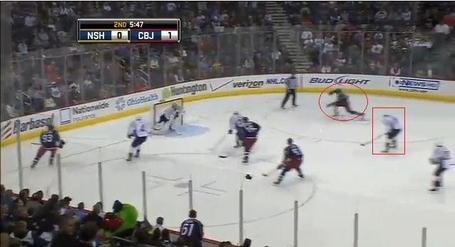 O'Reilly finally re-enters the frame, but its too little, too late, and he's merely coasting. Nash has already released the shot, and Rinne isn't quite fast enough to make it all the way to the left side of his net.

Not to take credit away from the Jackets, because it was a slick feed from Voracek and a typically good finish by Nash, but most all of the problem would've just been eliminated by O'Reilly following O'Brien's instruction and picking Nash up as he came down the right wing.

In summary, odd man rushes can certainly be the fault of a defenseman, but very often it falls to the forward who is supposed to keep up with the trailer on the play.