Into the Film Room: Paul Mara's game winner against Nashville

Share All sharing options for: Into the Film Room: Paul Mara's game winner against Nashville

With the past five Nashville Predators games all being losses, there aren't many positives to draw from, and today's video review is no different. The Predators were tied with Anaheim with less than 2 seconds to go in Sunday's game when a bad mistake from team captain Shea Weber led to Paul Mara scoring the game winning goal.

Your frame-by-frame breakdown is after the jump. 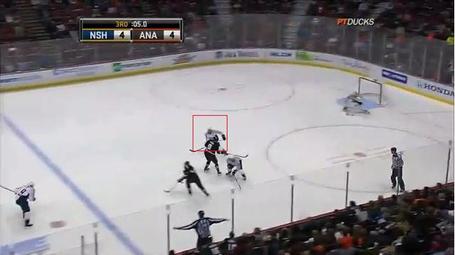 This play, as many others, starts relatively harmlessly. Corey Perry enters the offensive zone with the puck, and Bobby Ryan skates between Shea Weber and Francis Bouillon on his way to the net. Nothing, as of yet, is wrong. 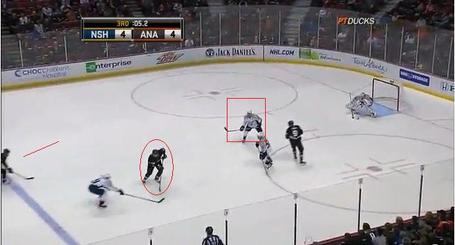 Ryan makes his way towards Anders Lindback, apparently without Weber or Bouillon taking notice. Marcel Goc attempts to dispossess Perry of the puck, but with no success. Notice the Duck entering the zone at the blue line, who Weber appears to pick up. 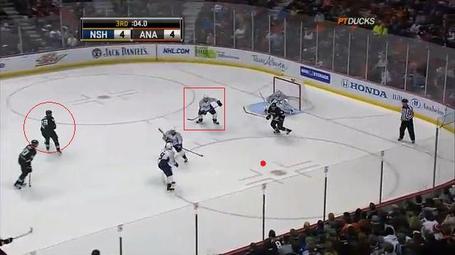 Okay, never mind. Turns out that Weber decided not to cover Paul Mara after all, but instead go after the puck, which in and of itself is okay - the problem is Bouillon and Goc are already on the scene. Weber's mistake here allows Mara to move in relatively unnoticed, because all the focus is on the puck, including Lindback's. 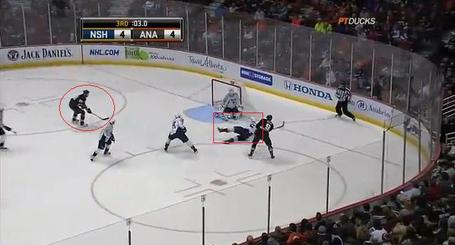 Ultimately, Shea Weber's decision to track the puck instead of the defenseman skating towards the net cost the Predators their 5th straight game. Weber dives towards the puck carrier, Bobby Ryan, who simply slides a pass across the face of the net to Mara. Mara has almost the entire net to shoot into, and an NHL player is not often going to miss this kind of opportunity. Tracking the puck is not always a mistake - but doing so when you leave an opponent at the back door will usually prove disastrous.

While we all know what Shea Weber is capable of, and how good he's been through 13 games, the absence of Ryan Suter has led to a few more mistakes than usual. Without Suter, Weber is expected to put the team on his back. On some nights, we'll want to award him the Norris Trophy, but occasionally fatigue and a sense of desperation set in and the team will follow suit.