The folks at Flip Video have rolled out a new series of NHL-themed digital camcorders, just in time for the holidays, and they even sent me a MinoHD model which looks like it's ready to hop over the boards and start killing penalties for Barry Trotz: 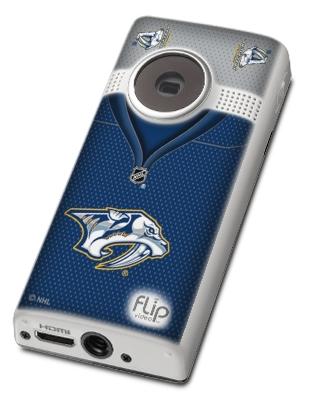 You can customize and order one these digital camcorders at the Flip website (there are a zillion other designs besides the NHL), at prices ranging from $149.99 to $229.99 depending on the model and storage capacity desired. If you're willing to go with a basic color, however, you can also find them via Amazon at a discount. For example, a black Flip UltraHD, with 8 GB (2 Hours) of storage

* is just $179.99, a savings of $20 over buying directly from Flip. That model is currently #2 on Amazon's bestselling camera list*

*, and pick the model that works best for you.

The Flip is easy to use and best geared for folks who like to get things posted online quickly with the minimum amount of hassle. I'm especially impressed with the sound pickup on the built-in stereo mic, as the audio comes through clearly even when you're using a normal speaking voice. It also includes FlipShare software which allows for very basic video editing (trimming the beginning and end, for example) and submission to popular online venues like YouTube, Twitter and Facebook.

For any video editing more complicated than that you'll want something more sophisticated. Since the Flip generates MP4 files, that means Windows Live Movie Maker won't work for Windows users out of the box. I've gone with Sony's Vegas Movie Studio HD

, myself. If you want to act quickly, you can save 30% on everything at Sony Creative Software through Dec 14 2010.

I plan on using this camera to further an idea I dabbled with a month or two ago, the On The Forecheck YouTube Channel, so stay tuned as we take our hockey talk into the wonderful world of video!

*Affiliate link - if you purchase an item via Amazon after following that link, I'll get a small commission. It won't cost you a penny more, however, the retailer pays it.