Where in the world is J.P. Dumont?

Share All sharing options for: Where in the world is J.P. Dumont?

Besides providing further information on the roster shuffling on defense, John Glennon's afternoon update today includes a look at some new lines at practice today:

Not too much else going on today for the Pre­da­tors, aside from a little line tin­ke­ring. Preds coach Barry Trotz reu­ni­ted one trio that was effec­tive ear­lier in the sea­son - Jor­din Too­too, Mar­cel Goc and Mar­tin Erat. Here's what the lines loo­ked like at prac­tice today:

My question is, what has J.P. Dumont done to deserve getting dumped further and further down the depth chart like this?

Despite nearly identical basic stats as Steve Sullivan, for example, Dumont hasn't had a chance to play regularly alongside Jason Arnott for a long time.

Take a look at how J.P.'s Total Ice Time and Power Play Ice Time have gone this season on a game-by-game basis in the chart below. It appears that both are on a downward trend in recent weeks: 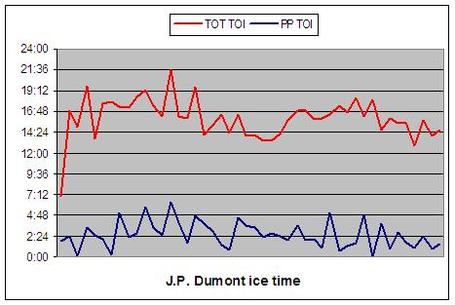 Is anybody else surprised by Dumont's freefall through the lineup lately?

UPDATE: In Thursday's night's win over Colorado, Dumont got only 8:45 of ice time, his lowest since the first game of the season, when he got knocked out of the game in the 2nd period. Playing on that line with O'Reilly and Jones, J.P. got just 4 shifts in each of the first two periods, and 3 in the third. Very odd stuff here...