The big, bad San Jose Sharks come into Nashville tonight for the Predators' last home game before the Olympic break.

Folks attending tonight's game can pick up the following Olympic tribute poster on their way in (which makes me wonder if I should wear my Swedish national jersey rather than my Preds 3rd tonight): 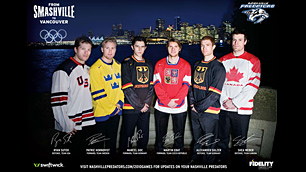 REMEMBER: The parking situation is impacted severely but the Music City Center construction, which began earlier this week. Check for all the details on which lots have closed before you head downtown!

As an added bonus tonight, it sounds like there will be a special guest singing the national anthem. Earlier this week, the Preds Chief Marketing Officer, Derek Perez, was a guest on the Thom Abraham Show (audio here - Derek Perez on Thom Abraham Show 20100204), and said that they had a surprise anthem signer lined up, with a CD coming out next week. I'm going to hazard a guess that it's the guy who filmed a music video at a Preds game recently, Josh Turner. His new CD, Haywire

As expected, the Sharks are rampaging through the Pacific Division once again, and their 37-11-9 record trails on Washington in the overall league standings. Tonight marks the second stop on a 6-game road trip that started Thursday in St. Louis, where the Sharks beat the Blues 4-2.

Of course, a visit by the Sharks also means a return for two former Predators, Jed Ortmeyer and Scott Nichol, who are enjoying successful seasons with their new team. Jed in particular is scoring goals at an unprecedented pace.

Might the Preds be in the process of turning things around? They've gone 2-0-1 in the current home stand, and sit solidly in 7th place in the West at 31-21-4, with Calgary and Detroit nipping at their heels and Colorado just ahead of them in 6th.

The most recent lines (with J.P. Dumont down there in the dog house) look as follows:

The Sharks are the #2 team in the league in 5-on-5 play, but the Predators are no slouches themselves.

Evgeni Nabokov has often been criticized (by myself, among others) as being just a decent goalie supported by a stellar team, but this year he's having perhaps his best season. It's well timed, too, since his contract is up.

Pekka Rinne has won two out of his last three, and got a shutout in the one recent loss. Will he get the call again tonight?

The best hope for the Preds is simply that tonight's game means much more to them than it does the Sharks. According to Fear the Fin, the present concern in San Jose is finding a depth defenseman at the trading deadline to shore up their playoff chances.

This could, however, be a preview of a first-round playoff matchup, as the Sharks are slotted for a #1 or #2 seed in the West, and the Predators could conceivably land anywhere from 4th to 8th. The Preds are 1-1 against San Jose this season, and took a 4-3 decision in their last meeting in Nashville on November 17th.