The Stretch Drive: previewing the Nashville Predators' march to the playoffs

Share All sharing options for: The Stretch Drive: previewing the Nashville Predators' march to the playoffs

The Olympic break is finally over, which means its time to get back to some NHL hockey. The Predators have had time to rest, a new name on their building, and the starting goaltender got a raise. We'll know soon if David Poile will make a move to perhaps trade Dan Hamhuis or strengthen the team in other areas, but until then, lets preview the schedule and road ahead for the Preds...

What will it take?

I'm not going to waste any time talking about how important the playoffs are for Nashville, its hockey team, and its fans, so lets get straight to business. James Mirtle of the Globe and Mail estimates in his Playoff Push that it will take 94 points to make the postseason in the Western Conference (the Predators currently sit at 71). Given those numbers, Mirtle is guessing the Predators need to put up an 11-9-1 mark in the final 21 games to get there. This isn't a scientific formula, but it is very helpful.

In a bit of a contrast, the website Sports Club Stats analyzes the playoff chase statistically, and has Nashville with a 100% chance of qualifying for the postseason if they post at least a 12-6-3 record. They can certainly make the playoffs with a lesser record, but thats currently the number that guarantees a spot. You can check in with that website on a daily basis to see how things change.

With that in mind, lets move on...

Who will they have to beat?

With 21 games left, I'll break it down into 7 game stretches, in chronological order, and analyze what a potential outcome might be.

The Preds kick off the playoff chase by taking on the Oilers, in a game that Nashville must win in order to have any breathing room down the road. Its absolutely critical that the Predators take care of business against lesser opponents like the Oilers and Thrashers. This is not a particularly difficult portion of the schedule, but there are several teams right around the Predators in the standings, which will make things much harder or easier in the future, depending on the results.

This part of the schedule has Nashville drawing a couple of "cupcakes", with the Wild, Blue Jackets, and Blues all on tap. The Kings, Stars, and Coyotes all lurk, so putting distance in between the teams by winning easier games is, again, a must.

The schedule makers were very good to Nashville in March, assigning the team ten home games. The Preds will need to improve their home-ice play in order to improve their playoff-positioning. If they can play as well at home as they have on the road, things'll be looking up. This is where Nashville's depth must shine, too, with players like Jerred Smithson, Joel Ward, and Marcel Goc carrying some of the mail as the season moves to its climax. 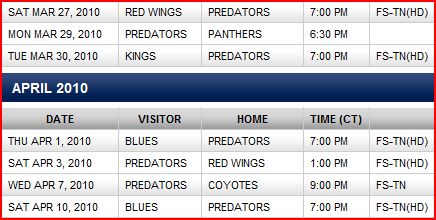 Unfortunately, if things go down like I expect, this will be quite similar to last year's run. The Predators were in it till the final days of the season, but lost one too many in the end. It may be that Nashville is required to gut out a couple of hard fought games in order to squeeze in. Its only fitting that the difference between chasing a Cup and going home could well be the Detroit Red Wings, the team Nashville has repeatedly cut its teeth on. Really, though, they're all going to be huge at this time of year. While the Blues and Panthers aren't "gimmes", it obviously helps to have lightweights near the end of the year.

Nashville's "big guns", players like Jason Arnott, Steve Sullivan, and Patric Hornqvist all need to be producing at this point in the year. When firing on all cylinders, the Preds are a tough out. They'll need a huge effort down the stretch.

Its going to be close (again) but I think the Nashville Predators have the right pieces to pull it out this year. A seventh seed will likely mean a matchup against the Chicago Blackhawks, who the Predators are all too familiar with. They'll need solid goaltending from Pekka Rinne and Dan Ellis, a fix for the abysmal penalty kill, and their home fans to step up in a big way, especially in March. I'm going to do my best to make it to the rink when possible-are you?

For discounted tickets to any Nashville Predators home game, follow this link and use the special offer code "PREDS".