Share All sharing options for: Growing blog traffic by riding the Olympic wave

Taking a break from hockey news and analysis for the moment, I wanted to share with you an interesting experience from the past few weeks that made for some big days here at On the Forecheck. I hope this holds a few lessons for anyone out there with their own blog, whether hockey-related or not.

It has to do with the Winter Olympics, and how a few throwaway sentences in a Sunday morning post turned into a major traffic generator for this site...

As a Nashville Predators blogger, my connection to the Winter Olympics was indirect; the Preds had 6 players involved with different hockey teams at the Games, so we planned on following their activity, and the general course of the tournament from a local perspective.

During the early games in Vancouver, traffic to the site was steady, as expected (about 1,000-1,500 visits, 2,000-3,000 page views daily). The hardcore Nashville fans were interested in seeing how their favorites were doing on the Olympic stage.

During the first week, the 12 teams played each other (within 4 divisions) to establish rankings, with the second week dedicated to a single-elimination playoff that would lead to the Gold Medal Game. The culmination of the first week was dubbed "Rivalry Sunday", featuring dramatic international matchups (Canada-USA, Russia-Czech Republic, and Sweden-Finland) that provided some of the most entertaining hockey of the tournament.

My preview piece that morning included a short explanation of how the playoff bracket would be determined, along with a nod to those Nashville Predators who would play that day. Nothing earth-shattering there, just something to set the table.

As the games on Rivalry Sunday played out, the team rankings began to come into focus, but the official Olympic website offered little information to hockey fans who wondered how the bracket was shaping up. During the afternoon, I noticed that I was getting a surprising bump in traffic, mostly from Google as users were searching for "Olympic hockey bracket".

Once all the games were complete, it wasn't until several hours later that the official layout for the playoff portion of the tournament was posted, and even then, it took some digging within the site to find it. As I followed the hockey conversation on Twitter (where I can be found at @Forechecker), it was clear that most fans were left in the dark, and would have to wait for the morning newspaper to get a look at the whole picture.

This is where I seized an opportunity - a mass of people were looking for information which should have been immediately available, but wasn't. Following the Olympic guidelines, I assembled a playoff bracket using Microsoft Excel, where I then used a macro to create a simple, clean HTML table which preserved the formatting. I posted it as soon as the Sweden-Finland game ended to conclude the preliminary round (in the wee hours of the morning), and went to bed. The final, updated version is shown here - it wasn't sexy, but clearly showed how the playoffs would proceed:

Hours later, I was on my way to a new record day in traffic, more than doubling any previous high. At first I figured that it would just make for a nice one-hit wonder, as mainstream sports sites would have this same information as well, and quick relegate my traffic back to more normal levels.

It turns, out, however, that I was able to build on that momentum for the rest of that final Olympic week, and have enjoyed a tailwind ever since, by taking a few practical steps.

Once I achieved a high search engine ranking for "Olympic hockey bracket" and related terms, I took a few measures to maintain that page's position on Google, Bing, Yahoo, and the rest:

This helped keep that page high on the search engines throughout the entire final week of the Winter Olympics, and in fact at this writing it still ranks 3rd on Google for "Olympic hockey bracket" (although of course that's no longer a hot topic). That kept new readers arriving for several days, and I tried to build in some long-lasting effects by adding a few tweaks to that entry page: 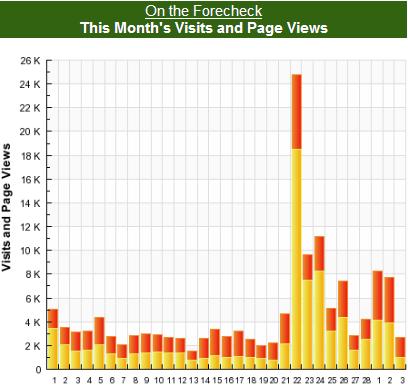 While this opportunity was tied to the Winter Olympics, there are any number of major events that offer gaps like this that alert bloggers can fill. As you follow the conversation in social media around topics like the Oscars, the NCAA men's basketball tournament, major political battles, etc., keep an eye out for the questions people are asking - there may well be many more out there wondering the same thing, and if you can meet that need, it's the chance to make a great first impression on an entirely new audience.

I'm certainly no SEO or blogging expert, but I do believe the steps I took above helped make this experience a success, and have led to an ongoing boost for this site.

What could I have done better, though? Suggestions, anyone?