Share All sharing options for: Volchenkov's hit on Simon Gagne: Fair or foul?

The Philadelphia Flyers are steaming mad today over an incident in last night's game against Ottawa involving a hit along the boards by Anton Volchenkov on Philly's Simon Gagne. The Flyers' reaction to the hit led to a Senators goal, and afterward Gagne went after Volchenkov, drawing 19 minutes in penalties and leaving his teammates shorthanded for 7 minutes.

Besides the obvious irony of the Flyers complaining about the referees after the stuff they got away with in Nashville last week, however, there's good reason to believe that Philadelphia is way off base here.

The Flyers players and coaches cried foul after the game for the lack of a call on Volchenkov's hit, but watch the video for yourself, and be open to the possibility (as voiced by the color commentator) that Gagne's last-second turn to face the boards is what made this play so dangerous. Follow after the jump to check out the video, along with a further breakdown:

After seeing some of the details, I think you'll agree that Gagne put himself in a dangerous spot here...

Let's take a look at some screen captures from this video. We start with Volchenkov approaching Gagne from the side as he plays the puck. At this point he's probably 4-5 feet away from making contact: 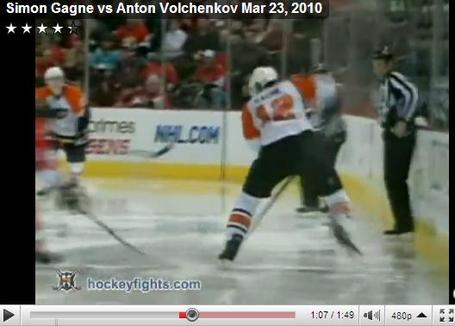 In our next shot, Volchenkov's about 3 feet away, still coming at Gagne's side: 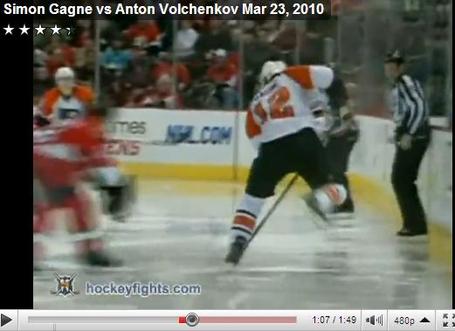 Only now do we see Gagne's back turning towards the oncoming checker, when he's about 1 foot away from impact: 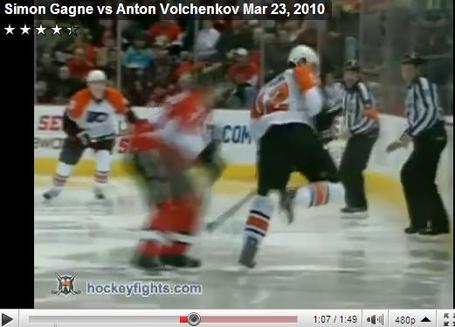 Here comes the hit, square in Gagne's back: 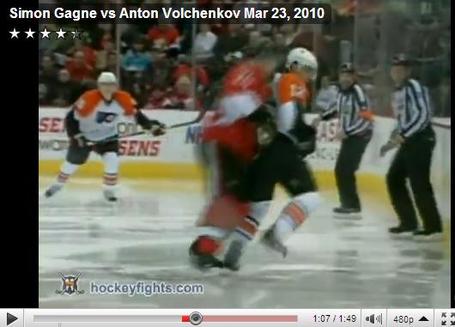 Followed by the dangerous aftermath: 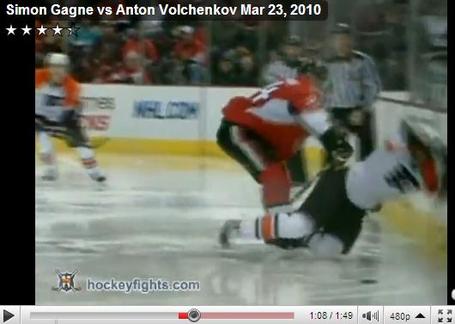 Do you notice something, however, about those first four screen captures?

They all occurred within a single second.

There is simply no way that Volchenkov had time to pull up once Gagne turned to face the boards. The game of hockey, particularly at the NHL level, is simply too fast-paced to expect that in milliseconds, a guy like Volchenkov should be able to ease up and avoid potential injury to Gagne. At the time he was coming in, he expected to nail Gagne from the side, which is completely legal. Notice in the background of those shots that a referee and linesman were looking directly at the play.

Many would claim this should have drawn a Boarding call. From the NHL Rule Book (emphasis mine),

42.1 Boarding - A boarding penalty shall be imposed on any player who checks an opponent in such a manner that causes the opponent to be thrown violently in the boards. The severity of the penalty, based upon
the degree of violence of the impact with the boards, shall be at the discretion of the Referee.

There is an enormous amount of judgment involved in the application of this rule by the Referees. The onus is on the player applying the check to ensure his opponent is not in a vulnerable position and if so, he must avoid the contact. However, there is also a responsibility on the player with the puck to avoid placing himself in a dangerous and vulnerable position. This balance must be considered by the Referees when applying this rule.

I'm sure what drives people nuts is the amount of judgment written into this rule, but the fact remains that this hit would have not been anywhere near as dangerous if Gagne had not made that last, split-second turn to face the boards.

To those who would say that any hit to the back should automatically be penalized no matter the circumstance, that opens the door to players with the puck deliberately turning to the boards in order to draw a penalty. It's unworkable in practice.

Hockey is a dangerous, fast-paced game, and beyond skating, puck handling and shooting skills, we should marvel at players' ability to generally avoid nasty collisions like this on a shift-by-shift basis. There are times, however, when the inevitable occurs, and someone takes a nasty tumble into the boards. Let's just be thankful that in this case, Simon Gagne was able to get up in time to watch the puck go into his own net.