Jonathan Blum working his way towards an NHL future

Share All sharing options for: Jonathan Blum working his way towards an NHL future

With homegrown defensemen a continuing strength of the Nashville Predators as an organization (witness the success of Cody Franson this season), the natural question on the minds of Preds fans is what's coming next.

Jonathan Blum might be just that, and pressure for an NHL job as early as next season. The 21-year-old Californian enjoyed a phenomenal junior hockey career with the Vancouver Giants, and has seamlessly transitioned to the AHL level with the Milwaukee Admirals this season.

Eric Kent of Admirals Short Shifts sent us the following profile of how the 2007 1st-round pick (23rd overall) is coming along down in Milwaukee...

For Jon Blum, the comparisons to Cody Franson started before he even set foot on professional ice. Both entered the Nashville system from the Vancouver Giants; both names litter the record books of that franchise; both players carried the reputation of "offensive defensemen".

Now that his first full season with the Milwaukee Admirals is coming to a close, Coach Lane Lambert says the earlier comparisons may not be accurate.

"I see them both being very good players, yes. But one guy's big, the other guy is not so big. Cody's more of an offensive player than Blum, although Blum has some very good offense." Lambert was then quick to add some lofty praise for Blum. "Jon Blum might be a more complete defenseman ten years down the road."

Considering Franson has 19 points and is a team-best +15 this year for Nashville, that's saying a lot.

Thursday night, Blum played in his 72nd game this season for Milwaukee - matching a season high in games played. From here on out, his body will be taking an unprecedented toll.

"It is a long season," admitted Blum. "It's all about taking care of your body away from the rink - that's what makes you a better pro." Blum is also facing the difficult decision of resting for the extra games, or continuing to practice to get better.

"It kind of goes both ways. You want to make sure you're not playing out of your league. After practice, staying after shooting pucks or working on little explosive quickness stuff that you need to do to get better. I spend about five to ten minutes after practice each day working on those little things."

Blum's offensive abilities have never been questioned. The scouting report on the defenseman expressed concern over his slight build. While playing in Vancouver, Blum was listed at 6'1", 165 pounds. Today, he's a little over 180, and has shown little durability concerns. That continues to be an area that Blum focuses on in Milwaukee. 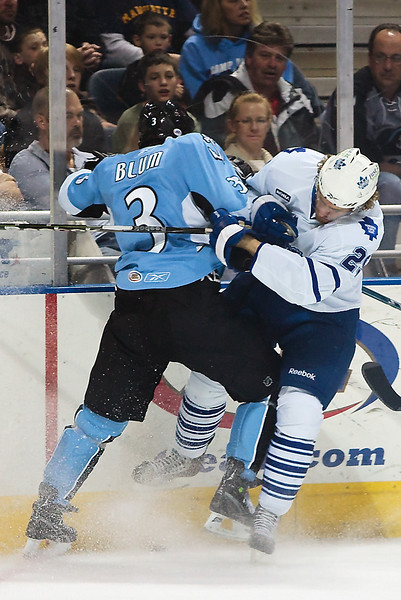 And it's not just his body that's getting stronger, team Captain Nolan Yonkman also notices Blum's mind getting sharper, too.

"He's learning the professional game," said the elder defenseman. "That's what it's all about - getting stronger, smarter, and faster to make that next step up to the National Hockey League."

Coach Lambert doesn't think that time is far off.

"I think he is going to be a terrific NHL hockey player. He is going to be steady. He's not flashy, he does everything well. He's stronger, he's faster, and he's able to get away from people now. He's able to contain people better now. He's made great strides this year as far as I'm concerned."

Blum is trying to keep it all in perspective, but admits that it's difficult; especially since the Predators keep trading for more defensemen that would (presumably) block his path.

"You see it on the websites and stuff - but you can't let it get to you," said Blum. "You have to do your job here. They don't want to rush you. Obviously, you want to have a long NHL career and that's what they've done with guys like Weber, Suter, Hamhuis - sending them down here and letting them adjust to pro hockey, and that's fine with me."

So for now - Blum will keep on working to be a better pro.

"I think I've done pretty well for myself here, I'm having fun with the guys coming to the rink every day and working hard. I've just got to keep doing that for the last few games and the playoffs."

That attitude has endeared Blum to everyone near him - and raised his profile in just a short time.

"When you put Jon Blum out on the ice," says Coach Lambert, "you know there's going to be very few mistakes made. It's a very comforting feeling, not only for his teammates but for the coaching staff. He just continues to progress."

Thanks to Eric for bringing us up to date down here in Nashville. When I polled the readers here last month as to what they'd like to see more of, one of the top requests was for more Milwaukee Admirals information. If you liked this piece, be sure to stop by Admirals Short Shifts and leave a comment bugging him for more!