With the Nashville Predators closing in on a return to the playoffs, tonight's tussle with St. Louis presents an opportunity to mimic a playoff situation. It's somewhat akin to a team being ahead in a series, and wanting to increase that lead by taking advantage of home ice (something Nashville has failed to do recently). Can they rise to the challenge?

While you're reading this morning's news and notes, be sure to listen to the podcast from last night's Hockeybuzz Radio Show - Paul McCann invited me to guest co-host with him, as we spoke with Craig Custance of the Sporting News, longtime NHL analyst Darren Pang, and Aaron Sims, the radio voice of the Milwaukee Admirals. I had a wonderful time, and you can't imagine all the work Paul and his crew go through to bring an hour of dedicated hockey talk to the Nashville airwaves. As the crowd loves to say at Bridgestone Arena... "Thanks, Paul!"

RADIO ALERT: John Glennon will be on the Thom Abraham Show during the 4:00 hour this afternoon. Catch it on 560-AM in Nashville, or WNSR.com.

But first, it is April Fool's Day, so follow after the jump, but don't believe everything you read...

Preds' Swede find Hornqvist works from last to first - CBSSports.com Hockey
When the last pick in the draft goes on to score 30 goals for a playoff-bound team, the national media starts to take notice.

International experience teaches veteran coach new tricks - CBC.caTim Wharnsby writes how the crew from Canada's team at the World Championships last summer, Lindy Ruff, Barry Trotz, and Dave Tippet, have built upon that time together to prosper as NHL head coaches this season.

Down Goes Brown: April Fools - NHL style
DGB has suggestions for various teams around the league as to how they can celebrate April 1.

Schedule favors Montreal, not Atlanta, in East playoff fight - USATODAY.com
While it's still possible for the Thrashers to sneak into the playoffs, the road to get there is extremely difficult, writes Kevin Allen.

Backchecking: Ranking NHL Defensive Units - TSN.ca
Scott Cullen comes up with a rather odd formula to determine which groups of defensemen are best.

How crucial are faceoffs to scoring goals at even strength? - Cult of Hockey
David Staples meanders around the issue of whether faceoffs are really a significant driver of NHL team performance. When the gap between great and lousy at the team level is 55% vs. 47%, that's a pretty good tip that there's really not a huge variation, nor a gigantic advantage to be gained.

Red Light District: Alex Semin taking his game to the KHL
Washington to lose an elite goal-scorer just as the playoffs approach? This could really shake things up.

NHL Expected to Sign 10-Year Extension With VERSUS, Develop Nightly Hockey Show For 2010-11 - Puck The Media
Whoa, big news on the TV front for the NHL.

RED WINGS SOLD - The View From Wisconsin
It looks like the Preds' biggest rival is heading East...

Flames' Langkow Unsure About Return This Season - The Grinder
Sadly, this is no April Fools joke; after taking a puck to the back of his neck in a recent game, Daymond Langkow is likely done for the year.

And lastly, thanks to all you have who stop by, whether on a daily basis or even if it's just once in a while. Traffic to this site jumped nearly 100% in February, and the just-concluded month of March exceeded even that figure. Onwards and upwards! 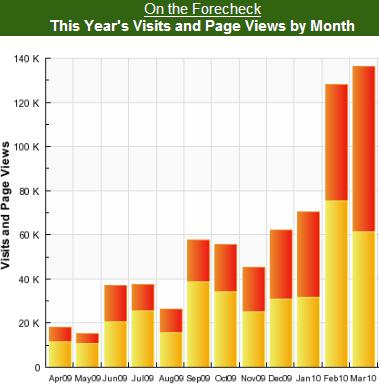 (yellow is visits, orange is page-views)