If you had to pick one story to come out of this Nashville Predators season, it would probably have to be the improbable rise of Patric Hornqvist into the NHL's elite goal-scoring ranks (he was also the runaway leader in our recent MVP vote). In just his second year in North America, he's become an integral part of the Preds' attack and is just the 4th player in franchise history to hit the 30-goal mark.

Looking forward, however, the question becomes - just how much potential does Hornqvist still have? Is this the best we can expect, or might he contend for a Rocket Richard Trophy in the near future?  The answer might surprise you...

As of this writing, Hornqvist stands 8th in the NHL in shots on goal with 275, and that's no fluke. He fired over 3 shots per game for the Admirals last season (161 in 49 games), and led his Swedish team in shooting back in 2007-8.

This year, he's had only one game in which he didn't register a shot on goal. One game! By comparison, Martin Erat has had 10 such games, and Steve Sullivan 14. The ability to put shots on net consistently is the single biggest factor in driving high goal-scoring totals. Some nights you'll be able to get 2 or 3 goals, and even on the off-nights, you might benefit from the occasional softie that trickles through.

The thing to keep in mind here, though, is that Hornqvist does this with just 15:47 of total ice time per game - the other leaders in the NHL's shooting totals range mostly between 19 and 21 minutes per contest.

To put this into perspective, I used the data for individual shooting in 5-on-5 play from Behind the Net, and added a few columns to summarize the rate at which various snipers shoot the puck:

This is sorted in order of Shots on Goal per 60 minutes of 5-on-5 play, and Hornqvist comes up 3rd in the league here, ahead of some pretty famous names. I guess the Preds didn't need Phil Kessel that badly after all, huh?

Next season, then, an additional 1:30 per game at even strength (one extra shift per period) could add about 25 extra shots to his totals. As a 23-year-old completing his 2nd NHL season, there should certainly be room for him to grow as a talent. It's also encouraging that there doesn't appear to be any glaring defensive problems that would keep the coaches from giving him that opportunity (he leads the Preds with a +18 Plus/Minus).

On the power play, Hornqvist averages 2:50 per game, a figure which is already reasonably high, but if the Predators really committed to him being the prime scoring threat up front, they could probably give him an extra minute there (20 NHL forwards currently get more than 3:50 of PP time per game). That's an extra 20 shots or as well.

Add those two factors together, and I'm projecting Hornqvist for about 18:15 of ice time per game next year, and somewhere around 320 shots on goal.

So we know that Horn Dog puts a ton of shots on net, and has the opportunity for about 15% more if he gets a bit more ice time. Those effects might lift him perhaps to 35 goals, but is there something larger at work here as well?

Let's take a look at that shooting percentage - 10.9% this season. That's pretty typical for an NHL forward, and best of all, it doesn't at all appear to be "lucky". Using my relatively crude Shot Quality model (used earlier this year when I examined Jason Arnott's production), I show Hornqvist as having produced just shy of 32 Expected Goals (what we'd expect based on the location from where his shots have come and other factors), against actual production of 30 so far.

Goal scorers tend to bounce around that Expected Goals figure randomly from year to year - there are very few players who score more than what we'd project based on shot location, shot type (wrist, slap, etc.) and the rest.

Basically, what I'm getting at here is the numbers confirm what our eyes are telling us - Hornqvist's goal-scoring is no fluke, it's the reward for getting to the prime real estate on the ice and putting lots of pucks on net. That's a formula that he should be able to build upon next season.

Even better, if he enjoys a career year and the bounces roll his way, he could exceed that Expected Goals figure by anywhere from 5-15 goals.

And you know what may be the best news of all? Let's take a look at his Expected Goals by game so far: 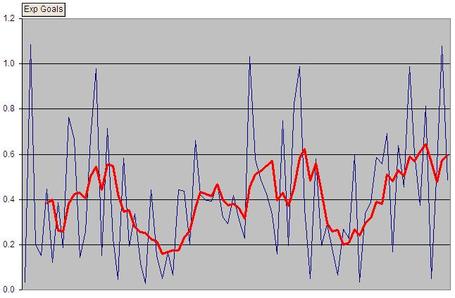 The blue line above shows game-by-game Expected Goals figures (how many goals he'd expect to score based on the number of shots taken, and the characteristics of those shots). The red line is a 5-game moving average, to smooth the noise out a bit and see how he's trending.

Heading into the playoffs, Hornqvist is chipping away as hard as he has all year. For whichever goalie the Predators face in the first round, that can't be good news.