Friday fun: Was it over when the Germans bombed Pearl Harbor?

Share All sharing options for: Friday fun: Was it over when the Germans bombed Pearl Harbor?

The IIHF World Championships get under way in Germany later today, with Nashville Predator Marcel Goc playing on what is truly "home ice" against Team USA. We've also got news that the Preds' scouting staff is in town, David Poile's reaction to being named a finalist for NHL General Manager of the Year, and news that the Phoenix Coyotes sale has taken another unexpected turn.

Follow after the jump for all that and more...

While the Cumberland River (at least in Nashville) has finally receded back into its banks, there are still many areas waiting for relief, and for everyone, the hard work of cleanup and recovery is only beginning. Most homeowners in this area don't have flood insurance, because the neighborhoods they live in aren't prone to flood (the Army Corps of Engineers stated that this was a once-in-500-years event).

I've added links in the sidebar for donations to the Community Foundation of Middle Tennessee, and Hands On Nashville, two prominent local charities which are directing relief efforts. Many thanks go out to the other SB Nation sites which are adding these links to their sidebars as well.

If you want an even cooler way to donate, please consider these items from CoolPeopleCare.org: 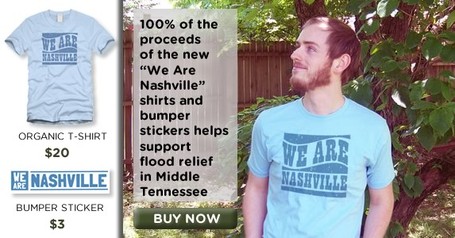 It's important to note that 100% of those proceeds go towards flood relief - there have been other vendors offering a portion of proceeds, but you want your maximum benefit for the dollars you're spending here. The "We Are Nashville" slogan comes from Patten Fuqua's "We Are Nashville" post over at Section303.com, which in recent days has been read on the radio by Dave Ramsey and Rush Limbaugh, and referred to last night by Anderson Cooper of CNN as well.

Come On Down To Nashville

Downtown Nashville is getting back to business, and if you have a trip planned to come to Nashville, it's important that you come on down and don't let the flood keep you away. The real kicker with natural disasters like this is that oftentimes it's not so much the initial devastation that hurts most, but the ongoing dropoff in economic activity because the local people lose their income-earning ability (economist Amartya Sen won a Nobel Prize recently for studying such dynamics). For Nashville, tourism is big business, and one of the best ways you can help this city is to come spend a weekend here, just as you've done in years past.

Last Night In The Playoffs

Montreal 3, Pittsburgh 2: We have ourselves a series, folks... tied at 2-2 and headed back to Pittsburgh.

Detroit 7, San Jose 1: The Red Wings staved off elimination thanks to a 4 goal, 2 assist performance by Johan Franzen. That set a new Detroit record for points in a playoff game (6).

Preds On The Glass: IIHF World Championship Starts Today and Friday Findings
Buddy's morning post includes the note that Team USA faces off against Germany tonight at the World Championships, in front of an expected record-setting crowd of over 76,000 fans.

THE GREEN PUCK IS HERE - IIHF.com
Marcel Goc leads Team Germany at the Worlds, which features a green puck with an anti-doping message.

Predators scouts' travel escapades continue while in Nashville - Nashville Predators Examiner
Are the Nashville Predators' scouts to blame for rising waters in the city? Jim Diamond makes a compelling case... "The last time the scouts were in Nashville a series of major water mains broke, causing havoc in the bustling area near Bridgestone Arena." Sure enough, they were in town last weekend as well. I'm watching you, Janne Kekalainen.

We've also got video of David Poile discussing his nomination as NHL General Manager of the Year:

How Will the Bruins Replace David Krejci? - The Grinder
Boston may be up 3-0 on Philadelphia, but they've got larger concerns even if they move on to the Conference Finals.

Recognizing the team builders - The Globe and Mail
Eric Duhatschek points out that maybe winning the new GM of the Year award isn't such a good idea.

O say, why do we have to see, the anthems being sung? - The Globe and Mail
Bruce Dowbiggin questions whether TV coverage of NHL games needs to include the opening anthem singers.

Canes Now - Versus doubles first-round viewers here, but...
Picking apart those TV numbers for the Raleigh market, they begin to look less impressive.

2010 NHL Playoffs: Home-Ice Advantage Vanishes in the Postseason - The Daily Fix
Road teams have won 54% of the games so far during the playoffs!