Share All sharing options for: Friday notes: a hockey season to remember

The reality of the end of this 2009-10 NHL season is finally sinking in, so the hockey news is slowing down for at least a few days (until the lead-in to the Entry Draft which is two weeks away, that is).

It's a good time to reflect on the season, however, and you have to admit that it was a pretty good one for the NHL. Sidney Crosby and Alex Ovechkin continued their duel for the title of Best Hockey Player in the World, while Henrik Sedin put together a career year in Vancouver to lead the league in scoring. The Phoenix Coyotes and Colorado Avalanche really turned predictions upside down with their surprising seasons, and out East, the Capitals did their best imitation of the 1980's Oilers before getting knocked out of the playoffs by Montreal in the first round.

Locally, the Predators defied outside expectations by convincingly returning to the playoffs, led by the goal-scoring outburst of Patric Hornqvist. Oh yeah, and those Olympics were pretty entertaining, weren't they?

First, to wrap up our week of Father's Day ideas for the Nashville Predators fan, why not go with something classic, like a watch 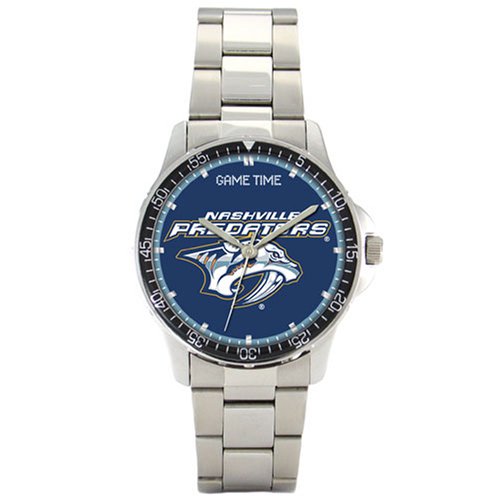 Preds On The Glass: The Finals Are Over, Now What? and Friday Round-Up
Just one day, and Buddy's going into withdrawal already!

Broken chairs may turn out to be blessing - The Tennessean
Steve Sullivan is participating in a creative way to raise money for flood relief; taking broken and discarded chairs, and turning them into art.

Pronger mocked during Blackhawks' locker room celebration - Puck Daddy
Chicago's Adam Burish (along with someone else, apparently) demonstrate how to win without class.

Ode to Claude (Puck-Rakers Blog)
With Scott Arneil taking the reins in Columbus, what will become of Claude Noel?

HTML5 Experiment: Visualizing the Stanley Cup
A pretty-cool demo of snazzy internet technology to visually display who's played for, and won, the Stanley Cup over the years.

Down Goes Brown: Leaked: Brian Burke's letter to the other 29 GMs about Tomas Kaberle
The "delicate little flower" is up for grabs...

Get to Know 2010 Draft
Here's a list of top draft prospects along with their projected NHL equivalent... who's going to get the next Steve Bernier?

s Best Players - The Grinder
Here's a list of top draft prospects along with their projected NHL equivalent... who's going to get the next Steve Bernier?