Dan Hamhuis's rights were sent from the Flyers to Pittsburgh for a 3rd round draft pick in 2011. This deal went down after the first round of the 2010 NHL Draft was completed. Pittsburgh hasn't talked to Dan yet, but they are hoping to talk to him and convince him to play for the Pens before he becomes a free agent July 1st.

Note from Dirk: I've confirmed with the Preds that because Philadelphia traded away his rights, the Predators will keep the conditional draft pick from the Hamhuis-Parent deal, so essentially David Poile picked up Ryan Parent for nothing here.

UPDATE: Here's the awesome headline from the Tennessean (hat tip to Igloo Dreams for the screen capture)... not only do they have the teams backwards, but the text of the article says the 3rd round pick is in this year's draft, when it's really for 2011. 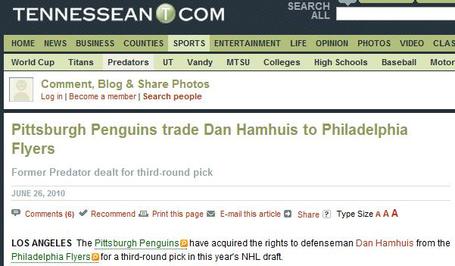