What FIFA and the World Cup could learn from hockey

Share All sharing options for: What FIFA and the World Cup could learn from hockey

As an American sports fan, I've wanted to jump on the World Cup bandwagon, but I'll be blunt - it's hard to take a sport seriously which features such consistently incompetent officiating in its hallmark event, along with players who flop to the turf several times a game, faking injury to draw calls or stall the action. Just in the last few days, we saw England's tying goal against Germany overlooked despite crossing the line by two feet, and numerous offsides situations which have been missed, only to lead to critical goals being scored.

In the US, the natural cry is for FIFA to catch up with other professional sports organizations and utilize video review to one degree or another. In every sport this move was initially met with furious opposition, only to be embraced over time as fans, players and coaches alike realized that a small delay (and it needs to be kept small) is an acceptable price to pay in order to "get it right".

The thing is, there are some easy steps which FIFA can take to improve the officiating without having to resort to video review. While it wouldn't ensure that every error will get caught, soccer could do well to take two lessons from the world of hockey... 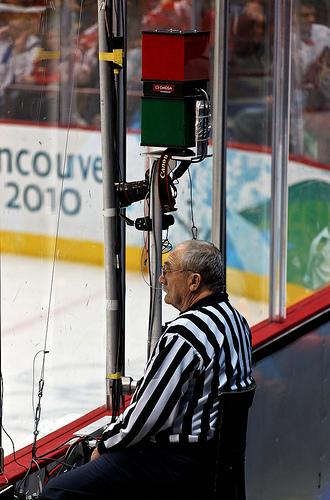 Until the NHL committed to extensive use of video replay, this was my plan to spend a comfortable retirement. You put someone in a designated spot whose sole job is to make Goal/No Goal determinations, and turn on the red light as needed. While not as reliable as video review, a goal judge generally has a much better viewpoint than the current referee who has to jog up and down the field while keeping track of the general flow of the game.

Goal judges are no longer found around the NHL, having been made obsolete by the video War Room in Toronto, which reviews every goal scored in every game. They worked pretty well for decades, however, and would be a ridiculously easy way for FIFA to improve its goal/no goal calls.

As for the "War Room"... as you can see in the video below, it's a great example of a league doing its best to make correct calls. They're not perfect, but darn close. Soccer won't get to this point for a while, but it's something they should aim for. In the meantime, however, find a couple old codgers and set them up as Goal Judges.

Starting with the 2000-2001 season, all NHL games have been conducted with a two-referee, two-linesman setup which has greatly increased the ability of officials to catch fouls behind the play. All too often, as a puck carrier came through the neutral zone, opposing defenders would hook, hold, and otherwise obstruct attackers trying to join the rush.

In soccer, the field is just too large and there are too many players for a single referee to keep track of. Just as it took time for the NHL to phase in the use of a two-referee system, FIFA could get started on that process, which involves somewhat of an evolution to define the on-field boundaries and operational practices. There is also the matter of developing referees at the lower levels, and the NHL is just now pushing to utilize this setup in the AHL, the primary minor league in North America.

The bottom line, however, is that nobody in NHL could envision going back to a one-referee system, and I'd bet the same would take place in the world of international soccer after a few years. Sure, there's an initial period of flux during which additional calls get made and players learn to adapt to having an extra set of eyes watching them, but ultimately that's in the best interest of the game.

The World Is Watching

Frankly, FIFA should be embarrassed by the number of times that officiating has overshadowed the competition at this 2010 World Cup. Instead of complaining about the critics, however, their leadership needs to do something to ensure that what is touted as the World's Greatest Sporting Event actually looks like it, rather than professional wrestling on turf.