Monday's news: Get ready for a hockey party in Nashville

Share All sharing options for: Monday's news: Get ready for a hockey party in Nashville

Today's a big day for the hockey community in Nashville - at the Tin Roof on Demonbreum from 6:00-9:00 p.m., there will be an "NHL Tweetup" to benefit flood relief efforts. Mark from The View From 111 has been the driving force behind this great event, which will feature a number of special guests, a silent auction, and an online auction as well for hockey fans around North America who want to pick up some cool gear, and help Nashville rebuild at the same time.

And now... onto the news to start your week!

SB Nation Expands for Fans, by Fans Sports Sites - NYTimes.com
This week is a big one for SB Nation, with the rollout of 6 city-specific sites that amplify our coverage of those markets. Take a look at SB Nation Chicago to get an idea of what this means - basically, a local sports section served up all in one place. Nashville isn't yet on the rollout list, but stay tuned.

Follow after the jump for discussion around last night's Game 5 triumph for Chicago, anticipation of new head coaches in Columbus and New Jersey, and video of Chris Pronger getting absolutely clobbered into the boards...

First off, I thought I'd share a few Father's Day

ideas with you this week... Starting with a Nashville Predators "iPuck" Case

made from the same stuff as hockey pucks, available from Amazon: 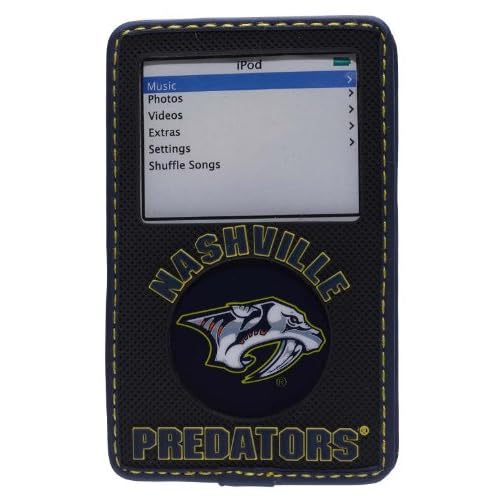 Preds On The Glass: POTG Radio Live at the Nashville Flood Relief Tweet-Up and Weekend Wrap-Up
Buddy's going to produce his weekly podcast from the Tweetup tonight, so you out-of-towners can get a flavor of the happening tonight.

NBC's Dan Patrick talks Final, Pronger snark, more - NHL.com
The former ESPN Sportscenter icon is on board for the remainder of the Stanley Cup Final.

Nearing the end of NHL marathon - The Globe and Mail
When you look at the body of work this season, it's a wonder the Blackhawks and Flyers have any energy left.

Sharks UFA situation: blessing or curse? | The Hockey Writers
Can San Jose retool on the fly as they deal with a number of upcoming free agents?

What will the blueline look like without Volchenkov? - Silver Seven
With their premier shot blocker heading into free agency, Darren examines the Ottawa defense going forward.

Does Todd Bertuzzi deserve another deal? - Winging It In Motown
The Red Wings have re-signed Nicklas Lidstrom and Tomas Holmstrom, so is Big Bert next?

Its Time For VERSUS to Get the Credit it Deserves " Puck The Media
Steve Lepore argues that the NHL's gamble from a few years ago is starting to pay off.

From the Department of Obvious Statements: The Draft Matters - Bird Watchers Anonymous
In this salary-cap era, getting maximum performance out of your young players is essential to long-term success.

Coming Down the Pipe!: This n' That - June 2010
Guy Flaming looks at a number of stories heading into the NHL Draft, including just how far Kirill Kabanov will fall after leaving his junior team, then admitting he made a mistake.

'Behind the Stripes' to debut on NHL Network Monday - NHL.com
Set your DVR's (since you'll be on your way to the Tweetup, right?) to record this look at the life of NHL referees.

Hockey World - Edmonton Journal
Jim Matheson has news & notes from around the league, including speculation as to whether the Oilers should make a run at trading for Chicago's Kris Versteeg.

What We Learned This Season - Slap Shot Blog
The guys at the NY Times discuss a few of the large themes coming out of this NHL season.

And finally, did you catch the big hit that Dustin Byfuglien put on Chris Pronger last night? I honestly can't remember ever seeing Pronger getting rocked like this: