Tuesday's news: Fresh-faced coaches to debut in Columbus and Tampa

Share All sharing options for: Tuesday's news: Fresh-faced coaches to debut in Columbus and Tampa

With an extra day off before Game 6 of the Stanley Cup Final, the NHL's coaching carousel has taken center stage today. New coaches are expected to be named soon in Columbus and Tampa, while Atlanta and New Jersey continue their searches. We also have a projection as to what the Predators might do at the NHL Entry Draft, a review of the goaltending depth chart within the Nashville organization, and a video report from a charity softball game last night featuring Wade Belak and J.P. Dumont.

Before you get reading, have you filed your daily vote for the Toast of Music City? I'd appreciate your support for Best Blog in Nashville...

As part of the leadup to Father's Day, here's another suggestion for the dad in your life. Let him fly his hockey freak flag high 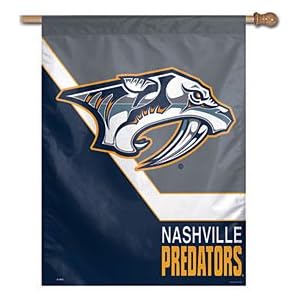 Preds On The Glass: POTG Radio Podcast from the Tweet-Up for Flood Relief and Tuesday Tidbits
Buddy has the recap from last night's wonderful NHL Tweetup at the Tin Roof, along with his podcast, conducted during the event. Remember, the online auction is still ongoing, so check out the items and make a bid!

Coming Down the Pipe!: 18th - Nashville Predators Draft Preview
Dean Millard and Guy Flaming take a look at what Nashville might do on Draft Day.

Red Light District: Predators Goaltending Outlook
With Pekka Rinne locked in as the #1 starter and Dan Ellis heading to free agency, Ryan Porth looks at the rest of the Predators' goaltending options.

Nashville Predators prospect Ryan Ellis hopes to make NHL quickly - The Tennessean
Can Ryan Ellis earn an NHL roster spot this fall? If not, it's back to junior hockey, where I doubt he has much to learn any more. Unfortunately, Milwaukee is not an option this year.

Thanks to a pointer from SLakePreds on Twitter, we also have word that Milwaukee Admirals defenseman Robert Dietrich has signed a new contract to return home and play in Germany this fall.

Hockey player’s dire battle against leukemia inspires thousands - Puck Daddy
This story goes way beyond the game - a player on Yale's women's team is battling acute myeloid leukemia, and needs a donor desperately. The hockey community is rallying to her cause, spreading awareness of a relatively easy form of donation - blood from the umbilical cord of newborn babies.

Blackhawks Ruminations: Six Questions Headed Into Game Six | The Hockey Writers
Jim Neveau does a good job of breaking down the major issues for Chicago as they try to win the Stanley Cup in Philadelphia tomorrow.

Greatest Hockey Legends.com: Ville Leino Nears Ciccarelli's Record
The former Red Wing is tearing it up for Philadelphia during this playoff run, and has a shot at the rookie playoff scoring record.

Amazing tales of the Philadelphia fan with the impaled Indian head - Puck Daddy
Further details behind one of the more disturbing images I've ever seen at a sporting event...

Arniel Hired (Puck-Rakers Blog)
After Guy Boucher was offered the Columbus coaching job, he turned it down. Congratulations go out to Scott Arniel, who comes in 2nd in this beauty contest, and wins a spot behind the Blue Jackets bench as a reward.

REPORT: Guy Boucher to Tampa Bay? - Raw Charge
Instead of taking the Columbus job, it sounds like Guy Boucher will be Steve Yzerman's choice to coach the Lightning. Will a rookie GM and rookie head coach turn things around in Tampa?

Summarizing the Michel Therrien to New Jersey Devils Rumors & Media Responses - In Lou We Trust
Will Michel Therrien reign over the Devils? John Fischer reviews the media reports and rebuttals.

NHL Players More Reluctant To Use Twitter, Facebook - Hockey or Die
Scott Lewis points to a video from Bloomberg about the lack of NHL player presence in social media, as compared to the NFL and NBA. Unfortunately, the report focuses mostly on the Blackhawks and Flyers. Did they miss Jordin Tootoo getting dinner ready in Rankin Inlet the other day?

Kovalchuk's Krazy KHL Offer - Puck Worlds
Is a mega-contract waiting in the wings for Ilya Kovalchuk? What does it mean for both the NHL and KHL if he accepts, or rejects, that offer?

mc79hockey.com - Fortune favours the bold
Tyler asks why the Oilers turn their focus towards building through free agency, or through draft & development. Why can't they leverage both approaches well?

Cashing In On Dual Offer Sheets - The Copper & Blue
An interesting strategy is offered for GM's to pursue restricted free agents and put the squeeze on teams with cap or budget issues. Might someone take a run at both Patric Hornqvist and Denis Grebeshkov via offer sheets? I doubt it, as NHL GM's only rarely go after RFA's.

Why MLS on Versus is good for the NHL - From The Rink
I have a hard time believing that American soccer can do much for the NHL, but Mike Chen makes a case for it.