Wednesday's news: Stanley's in Philly, while Hamhuis is in Haiti

Share All sharing options for: Wednesday's news: Stanley's in Philly, while Hamhuis is in Haiti

Is tonight the night that Lord Stanley's Cup gets rolled out in Philadelphia? The Blackhawks have a chance to clinch the series tonight, but the Flyers have put up an incredible fight and surely won't give up easily.

After the jump, we've got a host of hockey news for you. There's a review of the Predators situation with their upcoming free agents, a look at where various teams tend to look for draft picks, and Dan Hamhuis checks from Haiti with a video report. Also, if you work in IT for a living, you might want to take a look behind the scenes at the NHL's Application Development group...

Continuing the series of Preds-related Father's Day ideas, how about a business card holder

for his desk at work? 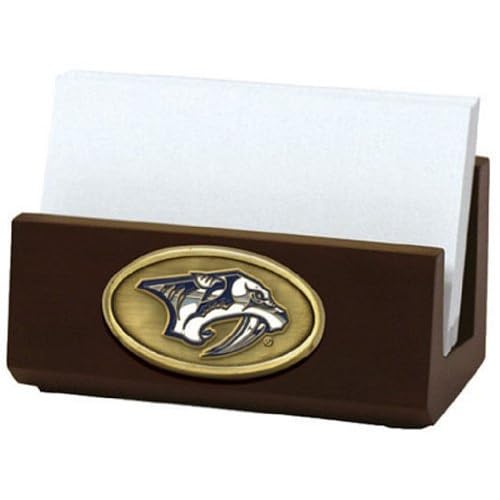 Preds On The Glass: Game Six Looms as a Potential Elimination Game Tonight and Wednesday Wrap-Up
Buddy ruminates over the possible end to the hockey season tonight...

The View from 111: Thank You Is Not Enough
Mark sums up the great evening Monday night, when over $2,000 was raised for flood relief efforts here in Middle Tennessee.

The View from 111: Nashville Flood Relief Tweetup Pictures
Mark also has all the photos from Monday's event, including an old rec-league hockey jersey I wore for the occasion.

Paul McCann - A Look Ahead...
Paul McCann considers the Predators to-do list this summer, and offers a few thoughts heading into Game 6 as well.

Speaking of Hamhuis, the NHLPA has this video to share from Dan's trip to Haiti as part of a drive to help a children's hospital there:

Tribune Provides Added Incentive With Cheap Shot of Pronger | NHLHotStove.com
Silly season is in full swing, as the Chicago Tribune runs a picture of Chris Pronger skating in a skirt leading into Game 6.

Canucks Should Pursue Hamhuis - The Canuck Way
One Vancouver blog argues that the Canucks should pursue the B.C. native for their blueline.

Down Goes Brown: Signs your favorite player may be bankrupt
Another great list from DGB, which includes, "His new dental bridge appears to be made out of paper mache, duct tape, and seven of Duncan Keith's old teeth."

EA Sports NHL 11's new features in depth - From The Rink
Mike Chen has the skinny on what's new in the latest iteration of the leading hockey video game.

2010 NHL Draft Preview - Fishing Holes - The Copper & Blue
A look at which leagues each NHL team focuses on at draft time, and which ones each team ignores. Nobody drafts more Finns than the Nashville Predators, for example.

City of Glendale Finally Gets on Board with Ice Edge Holdings - Five For Howling
With Jerry Reinsdorf having back out (for now), the Coyotes sale takes one small step towards completion, approving a Memorandum of Understanding which hopefully leads to further steps taking place over the next couple weeks.

mc79hockey.com - Countdown to Schadenfreude
Tyler wonders how the whole Phoenix situation will end up, and if the Ice Edge Group really has the financial backing that it claims to.

Boucher right fit for Lightning, plus 30 thoughts - Elliotte Friedman
Will Columbus end up happier with Scott Arniel, their second choice as head coach? Also, is their 4th-overall draft pick available on the trade market?

Lightning Appear to Have a Winner in Guy Boucher - The Grinder
Boucher is a rising star in the coaching ranks, and Tampa appears excited to have him.

Who Takes The Fewest Shots On Goal In The NHL? - The Copper & Blue
A look at the least-shooting forwards in the NHL since 1998. A Vancouver Canuck takes the gold and the silver.

Post-Lockout Divisional Imbalance - Behind The Net
Reaffirming what we already know - the Central Division pretty much rocks.

Jovenitti: Counting down the best names in hockey | The Pitt News
The Preds land one of their players on this Top 10 list of amusing hockey names...

Avs staying all in the Kroenke family - All Things Avs
Stan Kroenke, owner of the Colorado Avalanche, is buying the NFL's St. Louis Rams, and will apparently divest the Avs off to a family member in order to comply with the NFL's rules on franchise ownership.

Want To Work In The Application Development Department At The NHL? - KuklasKorner
A very cool video which reveals the geeks behind the groovy stuff at NHL.com.