Share All sharing options for: Monday's news: Judging the kids

This morning's hockey news seems to have a decided bent towards prospects - we have one Preds prospect unexpectedly changing his college plans, an alcohol-related scandal among Notre Dame's hockey team, and some musing over the entire notion that teams can make better draft choices by focusing on an individual's character.

All this and more after the jump, including some more fear-mongering from the Canadian media about our Preds...

First, apropos of nothing, I wanted to share something goofy I found on Amazon

over the weekend when searching for Nashville Predators items. How about we get one of these and stick him in the corner of the visitor's bench at Bridgestone Arena? 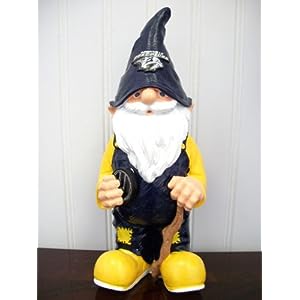 Cam Reid ready to head back to school - Nashville Predators Examiner
Jim Diamond brings us the story of a 2009 7th-round pick who suddenly found out that he couldn't attend the college he'd planned to, and how he had to readjust his amateur career on the fly.

30 Goals In 30 Days: #2 vs. Colorado, Oct. 8 " PredsBlog
"The point of this retrospective is to better determine how many of Hornqvist’s 30 goals demonstrated a repeatable skill, so that we can better project his next season" I'm not sure exactly what the criteria is here, but I think you can bet that if anyone could score 30 goals like Hornqvist did last season, they would.

The View from 111: We Have Nothing to Fear but Fehr Himself
Are the players set to get themselves a real pit bull for the upcoming negotiations with NHL owners on a new Collective Bargaining Agreement? If so, it would be the first competent act on behalf of the NHLPA in a looooooong time.

Future of Preds, Stars still up in the air - The Globe and Mail
David Shoalts just can't resist spinning the resolution of the "Boots" Del Biaggio business as potential peril for the Predators.

Kovalchuk's endgame, draft divers and 30 thoughts - Elliotte Friedman
At least Elliotte leaves us with a lot to chew on as he signs off for the summer...

Five Hole Fanatics: On Scouting and Weighting Personal Factors
Kent reacts to the whole notion of weighing "character" with regard to draft choices, which is something the Nashville Predators openly espouse.

mc79hockey.com - Going off the board in the draft
Very interesting read from Tyler - are the scouting efforts of NHL teams nothing more than "modern day phrenology" when they venture beyond the Central Scouting rankings?

Coming Down the Pipe!: More Legal Trouble at Notre DameUh oh, Pete Weber's not gonna be happy about this - a senior on the Notre Dame hockey team is alleged to have supplied 8 incoming freshman with a bunch of booze. As a Michigan grad, this is the part where I cackle. The real question is, how will this incident (and its aftermath) influence the perception of these players' character, and fitness for NHL duty? In the long run, does it really matter?

A look at the best 21-and-under NHL talent - NHL.com
What? No Colin Wilson? #FAIL

Blue Jackets president: Casinos could solve team's financial problems | The Columbus Dispatch
The BJ's and the city of Columbus are exploring options to plug their financial leak.

Encore: Reservoir Of Faith (Puck-Rakers Blog)
"GM Scott Howson told The Dispatch on Sunday that his focus in free agency will be signing a fourth-line center." Terrifying words for any Columbus fan. Why aren't they pursuing Denis Grebeshkov?

Who should be the next Sharks Captain? | Hockey Independent
Last summer they shook up the leadership in San Jose by appointing Rob Blake captain, but now he's retired. Who gets it next?

Disappointment: No Public Day at New Jersey Devils Prospects Camp - In Lou We Trust
The Devils really blew it on the Fan Relations front here, teasing that they'd have an open public scrimmage during their prospect camp, but not following through.

All Habs: Markov, Carriere, Desjardins in All Habs news
Montreal's best player, Andrei Markov, took the oath and became a Canadian citizen on Friday. That's one way to endear yourself to the fan base!