Share All sharing options for: Shea Weber named captain of the Nashville Predators

The highlight of tonight's Skate of the Union event at Bridgestone Arena was the introduction of Shea Weber as the fifth captain in Nashville Predators history, succeeding Jason Arnott after his trade to New Jersey last month. When donned his jersey with the "C" and was asked how it felt, Weber admitted that it felt "a little heavy."

Even before the Arnott trade, a change in captaincy was openly discussed in Nashville, and Big #6 was the runaway choice when OtF readers debated the issue back in May.

The question becomes, what aspect of Shea Weber's play do you think will translate best into his role as team captain? Is it the way he plays a ton of minutes in all situations? His legendary slap shot from the point? His ability to change the tempo of a game by dishing out major hits in the defensive zone?

Sound off in the comments below!

UPDATE: Follow after the jump for a picture of the new captain with his jersey and the statement from the team... 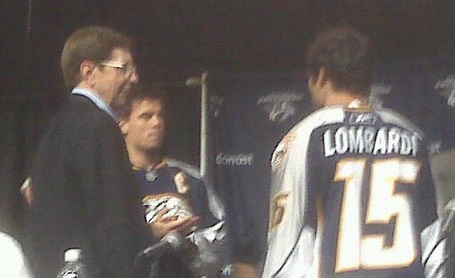 The new captain between David Poile and Matt Lombardi. My apologies for the crappy photography!

From the Nashville Predators:

Nashville Predators President of Hockey Operations/General Manager David Poile announced today that defenseman Shea Weber has been named the fifth captain in franchise history. He is the first Predators draftee to receive the honor.

"In addition to being one of the top young defenseman in the League today, Shea is a natural leader, and we are confident he has the respect of his teammates, opponents, the Predators organization and its fans," Poile said. "He becomes the first Predators draft pick to be named captain, and has been part of the culture and belief system we have worked hard to create."

Nashville's fourth choice, 49th overall (second round), in the 2003 Entry Draft has accrued a lengthy international resume as well, most recently winning a gold medal with Team Canada at the 2010 Vancouver Olympics. Weber was named to the Olympic All-Star Team in the process after tying for second among all tournament defensemen in points (2g-4a), and ranking second on the team in average ice time (20:37). He also earned a silver medal with Canada at the 2009 World Championships in Switzerland while being named best defenseman of the tournament and Canada's top player, and won gold medals at both the 2007 World Championships and 2005 World Junior Championships.