We'll have a special announcement later today on OtF, so be sure to swing by this afternoon and check that out, but until then, we've still got your morning hockey news.

After the jump we have reaction to Nashville getting mostly left out of the NHL's national TV schedule, more squabbling from the World Hockey Summit, and the long-awaited news that the NHLPA is taking on a notorious new leader...

Predators Item of the Day

If you're the parent of an elementary school kid, I'm sure you've probably seen those rubber bands which bounce back into particular shapes, like Silly Bandz

* (my 3 wee folk are always trading them with their friends). Well now, they've got some hockey-related ones with the Preds' logo as well, called Icons Logo Bandz* 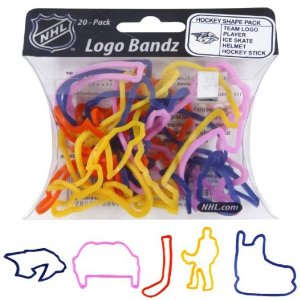 Nashville gets the shaft once again; only 1 national broadcast… | Section 303
Jeremy sums the situation up nicely. It's bizarre that the Preds are only on Versus once, while crappy teams like Columbus (3) and St. Louis (5) get more. Because of this, I'm guessing the most-used expression we'll hear about the Predators during the run for the playoffs will be "under the radar", because so few people will have seen them play on TV.

Preds On The Glass: A Missed Opportunity at the R and D Camp and Thursday Thoughts
Buddy wants to see the overtime loser point removed from the game (as do I), but the R&D camp was testing on-ice rule changes, not off-ice ones.

Fehr ready to bat for NHLPA - The Globe and Mail
Cue the Darth Vader music...

Different Cultures - Puck Worlds
It doesn't sound like the World Hockey Summit has led to an outpouring of cooperation. Instead, there have been lines drawn in the sand and lots of self-serving rhetoric.

Does Columbus Need A First Line Center? Or Do We Already Have One? - The Cannon
If you even have to ask that first question, I'm guessing the answer is "No".

Dancing in the Reign: Addition of Willie Mitchell brings stability to Kings defense - LA Kings Hockey Club Podcast
The Kings added a very talented, if brittle blueliner by committing to Willie Mitchell for two years at $3.5 million each.

Thank You Willie Mitchell - Nucks Misconduct
Meanwhile, take a look at a video tribute to Mitchell's time in Vancouver. The first one in this list is hilarious...

The Edmonton Oilers, Their Fans & External Attribution - The Copper & Blue
Remember, when you point a finger at someone, the rest of your fingers are pointing back at you. At least, I think that's what Derek is getting at here.

The Pittsburgh Penguins Dividend: A Franchise in the Mold of Berkshire Hathaway - SportsMoney
The Penguins are credited with the ability to get players to sign for less than what they might get elsewhere in order to win a Stanley Cup. Mike Colligan misleads a little bit when he compares Sidney Crosby's $8.7 million contract against the current cap max of over $11 million. When he signed that deal in 2007, the max he could have gotten then was a sliver over $10 million, and at that point, he hadn't had some of the successes of the last few seasons.

Want to add a Russian? Call Igor Larionov - Buzzing The Net
"The Little Professor" is setting himself as a key player in bringing Russian talent over to North America.

*yes, those are affiliate links to Amazon.