Share All sharing options for: Monday's news: one final fortnight before hockey

You can really start counting down the days, Preds fans - rookies report to training camp in just two weeks!

This morning we'll get your week started off with a healthy dose of hockey news. We've got a big fundraiser organized by Predators associate coach Brent Peterson, David Poile's reaction to all the experiments that were run up in Toronto last week, and it sounds like the end might finally be near for the Ilya Kovalchuk saga...

Nashville Predators Item of the Day

There's been a lot of discussion in recent weeks about the lack of apparel and accessories for female hockey fans (who have rallied around a Facebook group called No Pink in the Rink), so I wanted to toss this item out for consideration. I ran it by my wife, and she thought it was pretty neat. It's the NHL Nashville Predators Hoodie Duffel

* , a purse created out of a Predators-themed sweatshirt that hits the market on September 1st: 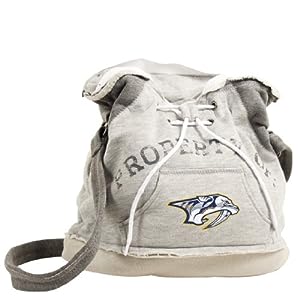 So what do you think, ladies? Thumbs up? Thumbs down? It's part of a whole line of accesories called Pro-FAN-ity by Littlearth

*, which covers most pro & college teams.

PFP's Dinner and Silent Auction - Peterson for Parkinson's Foundation
As part of the buildup to Brent Peterson's charity golf tournament (Friday, September 10), there's a dinner and silent auction the night before featuring comedian Henry Cho and other special guests.

30 Goals In 30 Days: #9 vs. EDM, 12/17 | PredsBlog
Sam gets giffy with his latest goal review, a great example of reading the play as it develops and finding a soft spot in the defense.

NHL tests a few rule changes - The Tennessean
Bryan Mullen got David Poile's thoughts on the experiments performed last week in Toronto, such as hybrid icing, modified faceoffs, and 3-on-3 overtime.

Remember, now that single games are on sale, readers of On the Forecheck can take advantage of discount offers on Nashville Predators tickets.

NHL deserves Olympic compensation - The Globe and Mail
Bruce Dowbiggin's close, but just off the mark. Rather than demand money for sending players to the Olympics, the NHL needs to get rights to use the video from those games. Highlight moments like the Ovechkin-Jagr hit, the Crosby overtime winner for the gold medal, Shea Weber ripping the German net, etc., should be built into commercials and used to help sell the game. But when was the last time you saw them?

Senators' team doctor in critical condition after crash - TSN
Terrible news for the Ottawa organization, as Dr. Donald Chow was thrown from his motorcycle after colliding with a car.

The Kovalchuk Saga: Is it finally over? - In Lou We Trust
On Friday the New Jersey Devils submitted a new contract for Ilya Kovalchuk to the NHL, and we should hear soon as to whether it gets approved.

NHL's salary cap something for other leagues to be envious of | The Denver Post
Terry Frei does the unthinkable for a member of the hockey media - recognize that the NHL's salary cap system actually works pretty well. Rookies have to prove themselves before hitting the jackpot (unlike the NFL), the system is fairly straightforward (unlike the NBA), and it fosters competitive balance (unlike Major League Baseball).

Don't forget about the Red Wings when sizing up the West - USATODAY.com
Kevin Allen says Detroit should still be counted among the favorites in the West.

The Dark Blue Jacket: Catching up
Even a Columbus blogger thinks the Preds got shafted by only getting scheduled for one lousy Versus game this season, and none on NBC.

Phoenix Coyotes Resign Lee Stempniak to 2 Year Deal - Five For Howling
They sure "seen him good" in Phoenix, as Stempniak scored at will for the Coyotes, but without Matthew Lombardi centering him, will he still produce?

Dancing in the Reign: Staples Center installs new HD scoreboard @ LA Kings Hockey Club Podcast
It looks like Kings fans will get to enjoy something close to what we already have in Nashville.

Preseason Power Rankings: Western Cellar Dwellers | Hockey Independent
Jeff takes a stab at predicting which teams will occupy the bottom 5 spots in the West. I agree with 4 of his picks...

Oilers Sign Sam Gagner - The Copper & Blue
Edmonton locks up one of their key young players. Gagner played a big part in new Predator Sergei Kostitsyn's best season of junior hockey, joining him on a line with Patrick Kane for the OHL's London Knights.

Faceoffs By Age - The Copper & Blue
Scott Reynolds looks at how centers improve over time on the dot.

*Amazon affiliate link - if you click through and buy something, I'll get a small referral fee from Amazon.