With NHL training camps opening this week, it's time to take a look at some of the resources that can help you compete in Fantasy Hockey, whether you're just starting out, or if you're an old hand at hockey pools. With any luck, I'll also offer up something later this week that I think you'll enjoy. 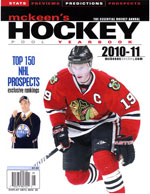 Up first? One of the premier fantasy hockey guides to hit bookstores every year, McKeen's Hockey Pool Yearbook...

Now, some of you considering fantasy hockey for the first time might be confused by the differing wording of "Fantasy Hockey" and "Hockey Pool", but rest assured they're one and the same thing these days. It's pretty much just a word choice made by Americans vs. Canadians, so don't let that throw you. If you see a "Hockey Pool" guide on the shelf, it should serve your purposes just fine.

With that out of the way, let's dig into McKeen's (which you may recognize as the hockey portion of Rivals.com), which offers not only statistical projections for the upcoming season, but a wealth of detailed scouting information on major players from each team which will keep you flipping through this guide all season long.

Plenty of sizzle, but lots of steak, too

One nice thing about this print publication is that they present their projections for 2010-11 in a number of ways. For example, at the start of each team's preview, there is a list of predictions for that roster, but again at the end there are complete lists of skaters, forwards-only and defense-only lists, along with a rookie section as well. That makes it a handy reference guide during your fantasy draft, so you can quickly zero in on your particular area of need.

The real highlights of this yearbook, however, are the player-by-player previews, which build upon the most recent three years of performance and are accompanied by team depth charts for both even strength and power play work. The scouting reports (about a dozen per team) are loaded with solid insight and make a great addition to your hockey viewing. Let's say the Predators are on the road playing Atlanta. Let's flip over to the Thrashers preview and see what they have to say about Nicklas Bergfors, a young winger who potted 21 goals last season:

Made an instant splash in Atlanta with six goals in his first eight games after arriving in February's Ilya Kovalchuk deal... the former first-rounder toiled for four years in New Jersey's system before breaking through last fall en route to an impressive fourth-place finish among NHL rookies... competitive undersized forward with good offensive skills... best weapon may be a quick, tricky shot which he isn't shy about using... agile skater - has a part-choppy, waterbug stride...

And that's only about half of it. The rest is a very detailed look at his on-ice characteristics, which greatly adds to the elements you can watch for in any given game. In a league of 30 teams, many of which you might only see once a year, it's a good idea to keep this yearbook within arm's reach of your couch.

For those of you reading in the Nashville area, your chances of finding this guide in your local bookstore are pretty much slim & none. Your best shot is to order it online direct from McKeen's, mailed to you for $16.99 in the U.S., or $14.99 in Canada (they also offer international delivery for $24.99 US).

To keep up with all of our coverage of the Nashville Predators, you can subscribe to the RSS feed, follow us on Twitter (@Forechecker, @predatweeter, @SLakePreds & @Short_Shifts) or catch the site on Facebook. You can also email me at the.forechecker@gmail.com.